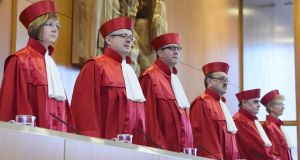 The Second Senate of the German Federal Constitutional Court: Samuel Beckett would have been struck by the theatrical overtones of a nation that sees itself as a hostage to EU and ECB fortunes. Photograph: Uli Deck/EPA

Samuel Beckett would have been delighted by Tuesday’s hearing at Germany’s constitutional court. The red-robed Karlsruhe judges trooped in to hear arguments for and against a bond-buying instrument that has never been used by the European Central Bank (ECB), an institution over which Germany’s highest court has no direct legal jurisdiction.

The drama revolved around “outright monetary transactions” or OMT, the first bond-buying programme that ECB president Mario Draghi pulled from his hat in 2012 after he promised to do “whatever it takes” to support the euro.

His words and the ECB’s bond-buying tool, later succeeded by another, were a shock-and-awe tactic that calmed financial markets and reduced sovereign interest rate spreads between healthy and less healthy euro economies. But was the OMT programme legal?

The ECB says yes: OMT prevented euro fragmentation and was in line with Frankfurt’s price stability mandate. Some 30,000 Germans disagreed, and saw in OMT an ECB breaching its own ban on financing states to spread liability throughout the currency bloc.

Because the independent ECB is not directly answerable to any member state, they called on Karlsruhe to halt OMT because it breached Germany’s democratic controls over its EU membership.

Pointing out the obvious

A second dramatic undercurrent was described by one lawyer in court as the “endspiel” – endgame – between the Karlsruhe court and the European Court of Justice (ECJ) in Luxembourg.

In a preliminary ruling, Karlsruhe said OMT was “incompatible” with EU law and the ECB’s mandate. The ECJ disagreed. Now Karlsruhe is likely to cover its blushes and approve OMT with another of its “yes, but” rulings.

Unless they want to declare war on the ECJ, the conditional approval is the only legal leg Karlsruhe judges have to stand on.

Which brings the Karlsruhe OMT endgame with the ECJ back to Beckett’s Endgame; a one-act drama starring a blind leading man, his servant and his legless parents who live in two bins.

For the growing number of Germans who, in the euro crisis and now migration crisis, see themselves as hostage to EU and ECB fortunes, Beckett has only his particular brand of cold comfort on offer: “You must learn to suffer better than that if you want them to weary of punishing.”