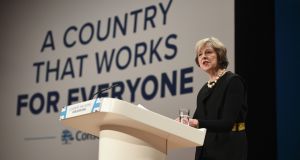 A number of proposals put forward by business groups in recent months to help Irish exporters facing difficulties due to Brexit have been rejected because they risk breaching State aid rules.

The revelation comes as pressure grows on the Government to introduce concrete measures in the budget to protect Irish exporters following a sharp drop in sterling after prime minister Theresa May confirmed a March deadline to set in motion the process of Britain leaving the EU.

Business groups expressed concern over the hardline stance taken by Ms May and other senior cabinet ministers towards Brexit. Many warned of dire consequences for Irish companies unless suitable steps are taken to support them as sterling fell to a three-year low of 87.4 pence against the euro.

“The phoney war between Britain and other member states is over and Theresa May has come out with a very hard stance and it is the worst possible situation for Ireland,” said Irish Exporters Association chief executive Simon McKeever.

“According to our research 85 pence is the pain-point for a lot of Irish companies and we’re close to that now so something has to be done to help companies who are already suffering on account of Brexit,” he added.

While many lobby groups called upon the Government to introduce strong measures in next week’s budget to assist exporters, including moves to improve competitiveness and to resolve border controls issues, many also admitted the Coalition has its hands tied in terms of what it can actually do, in part due to EU rules on lending but also because there are no quick-fix solutions.

“Government certainly realises that Brexit is a serious issue but it’s about what can be done within the confines of State aid,” said Patricia Callan, director of the Small Firms Association (SFA).

“We’re now at a point where it is questionable whether companies that are heavily exposed to the UK market can survive because this isn’t going to be a short-term issue, it is more of a structural issue and people need to completely reformat their business,” she said.

Ms Callan said while some issues are out of the Government’s control, a focus on cost-competitiveness and a more attractive tax offering for entrepreneurs were among the issues that should be addressed in Budget 2017.

“We need to be supportive of Britain staying close to the common market but at the same time we don’t want them to get the upper hand by not being bound by State aid public procurement rules and yet being able to compete more aggressively with us for investment and their own export sector,” she added.

Fergal O’Brien, director of policy at Ibec, said Ms May’s latest comments “upped the ante” by showing that Brexit may end up being more damaging to the Irish economy than initially envisaged.

“Everything has changed. We need a genuinely Brexit-proofed budget that focuses on specific issues such as competitiveness,” he said.

“Clearly, Government can’t counteract the full effect of the 15 per cent plus loss of competitiveness due to the exchange rate movement, but it can control and influence costs locally,” Mr O’Brien added.

Mr O’Brien said targeted measures, such as an enterprise stabilisation and employment support fund, similar to ones introduced during the last currency crisis, would be of assistance to exporters.

“Brexit is already impacting competitiveness for Irish SMEs as the sterling slide continues. However, uncertainty is just as great a concern, as it impacts the willingness of businesses to take decisions in the run-up to Britain’s exit. Recent utterances from London suggest an exit from the customs union and free trade area, something which could potentially have a significant impact on Irish SMEs,” he said.

Mr Bruton warned that once Britain leaves the EU, there will no longer be any non-UK controlled arbiter to protect Irish or other investors against discriminatory laws by a future government.

“It will be important that there be a robust independent investor protection disputes mechanism capable of overturning discriminatory decisions that might be taken by the UK courts against the interests of EU-owned firms,” he said.