Boomtime for cities across Turkey 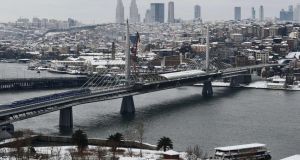 A general view shows the Golden Horn Metro Bridge in Istanbul: Turkey’s largest city racks up a massive 55% of the country’s total trade production and 35 billionaires – more than Paris, Tokyo or Dubai – have made their homes there. Photograph: Ozan Kose/AFP/Getty Images

Even with a president on the warpath and almost two million Syrian refugees weighing the country down, a recent study by the Brookings Institution and JPMorganChase has found that three of the world’s four fastest-growing cities are in Turkey.

Last year, employment rates in Izmir, Istanbul and Bursa grew 6.6, 6.5 and 6.4 per cent respectively. At 4.7 per cent, Budapest and Dubai were closest. So how have three cities within a six-hour drive of each other recorded such exceptional growth in employment and GDP per capita? What makes their metro economies different from the 300-odd other cities surveyed?

The study puts this down to vague “strong expansions in business and financial services”, but what is telling is that GDP per capita is about €17,700 in the three cities – almost twice that of Turkey’s national average.

This is the number one factor for thousands of would-be migrants living in eastern Turkey, where salaries are often a quarter, or less, than Istanbul’s.

“For Izmir, and particularly Istanbul, the reason for the fast growth is . . . manufacturing industries supported with ports and logistics are still strong and growing in these two cities, resulting in migration for low-skilled labour,” says Ela Babalik-Sutcliffe of the Middle East Technical University on Ankara.

In Izmir, a city of four million people, business and finance make up almost a quarter of total output; much of the new growth responsible for propelling it to near top in the Brookings study is down to traditional businesses opening up to the world after decades of solely in-country sales.

Industries such as Japan Tobacco International, which owns the Benson & Hedges, Silk Cut and Winston cigarette brands, produces 35 billion units of tobacco at its Izmir plant.

It is the money spent on Izmir’s huge, flashy new domestic airport terminal that suggests the city is now increasingly seeking business from inside the country. An unusual architectural layout that sees the centre of the terminal empty and restaurants and cafes situated alongside flight gates, the impossibly long, €265 million terminal is arguably more a statement than a practical venture.

Boosting Bursa now is the weak Turkish lira, which contributed to record car sales and exports in 2014.

Traditional manufacturing by multinationals such as ArcelorMittal, the world’s biggest steel manufacturing company, has contributed billions of euro to the local economy.

At this time of year, Uludag ski resort 30 kilometres south of Bursa is packed. A two-hour ferry ride from Istanbul and with 3,000 hotel beds, it serves as a welcome winter getaway for the city’s ski enthusiasts.

If Izmir and Bursa are flourishing at manufacturing, Istanbul is starting to thrive as a global start-up hub. A metropolis of about 15 million people, it is easily able to absorb the influx of Syrians who have cost the state well over €3 billion.

Where New York and London have until recently experienced static population growth, Istanbul has been adding about 300,000 residents each year.

Turkey’s largest city racks up a massive 55 per cent of the country’s total trade production and although 35 billionaires – more than Paris, Tokyo or Dubai – have made their homes here, it is micro services that are forging ahead.

The service lets you know how long delivery would take – before making an order – and a phone call from English-speaking staff confirming your order is a reassuring touch. “We are the biggest kitchen on Earth . . . for every 100 visitors to our website, 40 are buying during that session,” says co-founder Melih Odemis.

Critics however say that by favouring mega-projects, including plans to build one of the world’s biggest airports north of Istanbul, thousands of SMEs such as Yemek Sepeti are being ignored, and power is being concentrated in the hands of a few.

With the Turkish lira hitting record new lows against the dollar almost daily, and also weakening against the euro, their sustainability is already being called into question.

Last month, exports fell 10 per cent nationally and 19 per cent for Izmir, according to the Turkish Exporters Assembly. Turkey’s president Recep Tayyip Erdogan has railed against an imaginary “interest rate lobby” and has put tremendous pressure on the Turkish Central Bank to cut interest rates.

Economists continue to warn that Turkey faces an economic slowdown with the lira staying stubbornly low on exchange markets for three months now. As a result, Turkey’s tiger cities may soon find themselves caught in the crossfire.

1 Should my mam wait for house prices to drop before buying?
2 Cheers: Conor McGregor's whiskey races up the sales chart
3 Big majority uncomfortable returning to everyday activities
4 Why we’re about to learn if we are really in the A-team
5 US ‘hard seltzer’ drink White Claw launches in Ireland
6 Dublin drops out of top 50 in ranking of best cities for start-ups
7 ‘I’m so lucky to be in the Caribbean – a million miles from Derry Girls’
8 Citigroup warns that markets are out of step with reality
9 McCanns’ Balmoral sees property value hit from Covid-19
10 ‘I have a talent for justifying purchases’
Real news has value SUBSCRIBE