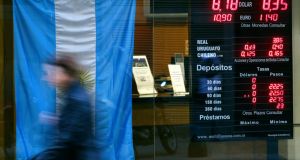 A woman walks past a currency exchange store with an Argentine national flag on display in Buenos Aires’ financial district. REUTERS/Marcos Brindicci

In one corner we have Argentina, serial defaulter. In the other, we have professional “holdouts”, bondholders who refused to accept a compromise deal with Buenos Aires and have become serial litigators. Whom should one wish to succeed? This is a tough choice. But I have backed Argentina for two reasons. The strategy of the holdouts works at the expense of other creditors. And, as sensible new proposals from the International Capital Market Association (ICMA) reveal, it works at the expense of restructurings, even when these are essential.

The sorry performance of Argentina is indubitable. The period since the 2001 default looks to be yet another waste of a golden opportunity. Enjoying the benefit of reduced debt and a commodity boom, President Néstor Kirchner and Cristina Fernández, his wife and successor, could have put the economy on an upward path. Indeed, gross domestic product has doubled since the default.

But prospects now look fairly poor. Moreover, Argentina managed its default in a high-handed way. Holders of 93 per cent of the defaulted debt were dragooned into exchanging the original bonds for new ones with a much lower face value.

Yet how much more bitter must the holders of these exchange bonds feel now; the US judiciary is preventing money due from reaching their accounts. Worse, Judge Thomas Griesa is doing so in order to protect the interests of those who refused to accept the exchange. Worst of all, the only reason the latter could hope to be paid is the acceptance of the exchange by others: Argentina could not have paid the holders of the $132 billion it owed in full. In all, holders of exchange bonds are right to feel that insult is being added to injury.

On the first, the holdouts’ strategy would not work if they held a large part of the debt, since it would then be too costly for the government to pay. So the amount of liquidity that holdouts provide is necessarily small. Furthermore, the strategy also works only if holdouts own enough of the bonds to prevent a compromise deal from being forced on them. That is why they focus on debt that is issued in small amounts. For both reasons, the liquidity professional holdouts provide is of minor significance.

On the second argument, defaulting governments know the holdouts would never settle. So there is no incentive to make better offers to other holders. On the contrary, the worse the offer to the other bondholders, the more money is left to pay off the holdouts. So the latter are working against the interests of the majority. If others follow the holdouts’ example, the result would be extra delay.

This must be why the ICMA has proposed that it should in future be possible to bind all creditors with a single overall vote, subject to a 75 per cent threshold. This would severely restrict holdouts’ ability to prevent a deal – except, unfortunately, in the case of small countries, where a blocking minority could be relatively cheap to acquire. Furthermore, the ICMA is proposing that the “pari passu” clause should be interpreted in a way that does not treat the claims to payment of holdouts and exchange bondholders in the same way.

Unfortunately, even if these desirable changes are written into future contracts, they do not exist in past ones. So the strategy of the bitter-end holdouts could well survive for a long time. It is desirable that the strategy be seen to fail in this case, despite its success in US courts.

Is this even possible? Adam Lerrick, an expert on debt restructurings, believes it is. He argues that holders of the exchange bonds, who are currently not receiving the money they are due, are entitled to change their trustee. A simple majority has the power to replace the Bank of New York Mellon with a new trustee - one that has no presence in the US, and is not bound by the decisions of US courts. Moreover, as Judge Griesa has made clear, exchange bondholders are not party to the case, and so are unlikely to be ruled in contempt. They would merely be acting to protect their own legitimate interests. Should the US courts take a different view, the procedure could always be cancelled.

Even if it wanted to, Argentina could not sensibly settle with the holdouts at present. That would trigger a “rights under future offers” clause, which prevents Argentina from offering better terms to holdouts than to holders of the exchange bonds. That clause expires at the end of this year, at which point Argentina could consider paying the holdouts, in its own interests. But that would further strengthen this damaging strategy. That would be objectionable.

Risky lending and default go together like a horse and carriage. Defaulters always pay a price, as they should. But creditors have to accept the inevitability of defaults. Servicing debt is indeed important. But it is not more important than everything else. That is why we have all agreed to accept bankruptcy as essential in domestic law.

A global bankruptcy regime for sovereigns is an unlikely prospect. Given this, the proposals from the ICMA are the minimum needed. Even better, sovereign issuers should shift from reliance on standard debt contracts towards greater use of ones with risk-sharing elements built in. Yet this is for the future. Right now, Argentina’s creditors should make every effort to protect themselves from the vagaries of American judges. Fleeing US jurisdiction would seem an extremely sensible move. Copyright The Financial Times Limited 2014