Olympic victories, Brexit posing and the strange case of the Universal fire

Planet Business: The battle ‘for the very existence of Britain’ continues 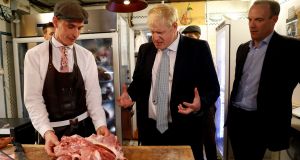 Image of the week:

The British are “in a battle for the very existence of Britain”, according to weary former prime minister Gordon Brown. So on which battlefront is PM-in-waiting Boris Johnson electing to spend his time? This week the campaign trail led him to the Surrey constituency of one-time rival Dominic Raab, with whom he visited a local butcher to muse at the carcass of Brexit. Johnson spent £4.50 on fennel and tarragon sausages, Sky News reported, then it was off to the pub with one-time Brexit secretary Raab. Along the way the Tory membership favourite did what he did best: blustered his mug into some ridiculous photographs. When asked if criticism of his campaign was fair, Johnson replied that the question was “beyond satire”. Like the man himself.

547 – Number of employees of US furniture retailer Wayfair said to have signed a letter to the company’s management asking it to stop doing business with contractors involved in Donald Trump’s border detention camps.

$86,000 – According to a Twitter user called @Wayfairwalkout, the company will make this sum from bed sales to camp contractors. It wants those profits to be donated to a non-profit that offers legal services to immigrants and no part in the “enabling” of their mistreatment.

60 – Percentage rise in Wayfair’s share price since the start of 2019.

Getting to know: Giovanni Malago

It’s been a happy week for Roman former futsal player and luxury car businessman Giovanni Malago (60), who, as president of the Italian National Olympic Committee, has had the pleasure of leading its successful campaign for Milan and ski resort Cortina d’Ampezzo to stage the 2026 Olympic and Paralympic winter games. Milan-Cortina was this week announced as the host by the International Olympic Committee (IOC), having beaten Stockholm-Åre to the prize. Both delegations stressed the sustainability of their vision for the games, but Milan-Cortina was deemed to have an edge in public support, with Malago claiming the backing of 83 per cent of Italians. There will be no Sochi-like excess, Malago has promised. Only one new arena needs to be constructed from scratch for the games, with the opening ceremony destined for Milan’s soon to be redeveloped San Siro stadium and the closing one scheduled for Verona’s Roman amphitheatre.

A group of musicians is suing Universal Music Group for negligence after the warehouse that housed their master recordings burnt down. But the strange thing about this story is that the fire happened in 2008 and it’s only now that the extent of the losses is being revealed thanks to an investigation by the New York Times. So which artists have had their masters destroyed?

1. Sheryl Crow: “It absolutely grieves me,” said Crow, who can’t understand why both the originals and the back-up copies could be stored in the same sprinklers-free vault, and why the destruction was covered up for 11 years.

2. Tom Petty and Tupac Shakur: The ex-wife of the late Tom Petty, the estate of Tupac Shakur, bands Hole and Soundgarden and singer-songwriter Steve Earle are leading a case seeking $100 million damages. It could turn into a very starry class action.

3. Bryan Adams: When Adams tried to put together a 30-year anniversary reissue of his Reckless album in 2013, he met a brick wall at Universal, “as if none of it had ever happened”. Adams says they didn’t mention a fire and he only heard about it recently in the New York Times.

4. Duke Ellington: Ellington, Billie Holiday, Fats Domino, Sister Rosetta Tharpe… more than 700 artists are thought to have had their tapes erased, including these early greats.

5. REM: The band tweeted earlier in June that it was “trying to get good information to find out what happened”, but it has since been named by the newspaper as one of the affected artists listed in confidential 2009 documents by French-owned Universal.