Officials leave interest rates at 0.1%, as they confirm plans to buy £200bn of bonds 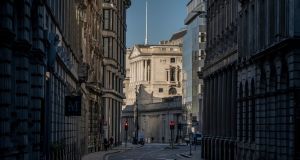 **EMBARGO: No electronic distribution, Web posting or street sales before 12:01 a.m. ET Thursday, March 26, 2020. No exceptions for any reasons. EMBARGO set by source.** The Bank of England in London, March 23, 2020. As Britain and the European Union respond to a public health emergency and economic crisis, they are abandoning dogmatic frugality. (Andrew Testa/The New York Times)

.Interest rates were left at a record low 0.1 per cent, after officials cut them from 0.75 per cent at two emergency meetings this month. At the second meeting, on March 19th, officials also said they would buy £200 billion (€ 218.5 billion)of bonds, a target that was left unchanged at this week’s meeting.

”If needed, the MPC can expand asset purchases further,” policy makers said in the minutes of their meeting on Thursday.

Officials “will continue to monitor the situation closely and, consistent with its remit, stands ready to respond further as necessary to guard against an unwarranted tightening in financial conditions, and support the economy,” they said.

Policy makers also gave some of their first analysis of the fallout from the crisis, saying that “there is a risk of longer-term damage to the economy, especially if there are business failures on a large scale or significant increases in unemployment.

The coronavirus outbreak has shuttered large parts of the economy and led to widespread predictions of a deep UK recession.

The BOE has also started a new program to provide easy and cheap credit for business, and worked with peers around the world to set up new dollar swap lines with the Federal Reserve.Meanwhile the Treasury announced the central bank would help provide funding to businesses by purchasing commercial paper in an unlimited programme.