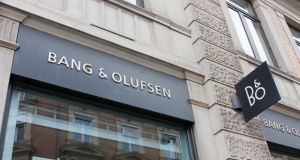 Bang and Olufsen issued its most recent profit warning in June, when it said that sales were falling even faster than anticipated

Bang and Olufsen on Friday had its best day on the stock market since the beginning of the year after its chairman signaled that the beleaguered maker of luxury TVs and stereos is up for sale.

It’s not clear that BandO, which is based in western Denmark, has any potential suitors, but the comments by chairman Ole Andersen to the Borsen newspaper were embraced by investors, who drove the stock up as much as 15 per cent after the market opened in Copenhagen on Friday.

“If we were to get an approach, then we’ll listen, but it would naturally also need to be discussed with the shareholders. We’re obligated to do that,” Mr Andersen told Borsen.

Asked whether such a scenario is now more relevant, given the latest developments at the company, Mr Andersen said yes.

“Given that we’ve had to issue profit warnings three times, the lights are starting to blink a little,” he said. “We’re in a situation where we need a contingency plan, and we of course have one.”

The comments come after a disastrous year for BandO, which even after Friday’s share-price gains is down almost 50 per cent in 2019. BandO issued its most recent profit warning in June, when it said that sales were falling even faster than anticipated. – Bloomberg