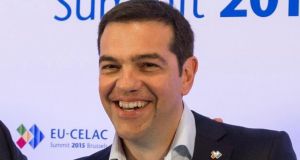 Greece’s prime minister Alexis Tsipras: the ECB research comes at a time of heightened tension between Greece and its international creditors, with the government rebelling against attempts to reshape its economy. Photograph: Virginia Mayo/EPA

Economists at the European Central Bank have claimed that government austerity works, saying policies of the sort imposed by the troika on weaker euro-area member states lessen the longer-term pain associated with high levels of government debt.

The paper comes at a time of heightened tension between Greece and its international creditors, with the government rebelling against attempts to reshape its economy. It highlights differences within the troika on how best to handle the crisis.

The troika of international creditors, the ECB, the International Monetary Fund and the European Commission, has pressed Greece and other indebted member states to enact structural reforms and cut spending quickly – a practice known as front-loading – in exchange for loans.

Economists have fought over how best to turn the fortunes of the euro zone’s weaker members. While the troika’s policies appear to be paying off in Ireland and other economies such as Spain are seeing the benefits of austerity, Greece has seen its economy shrink sharply and unemployment rise to much higher levels than expected.

The ECB economists’ view, laid out in a paper published yesterday, is the initial damage done by fiscal consolidation, such as government spending cuts, on growth wears off and is reversed within a few years.

The research also finds fiscal multipliers – which reflect the change in national output when a country’s fiscal stance is altered – are smaller in the presence of weak public finances. This is particularly so when the sustainability of government debt is at risk, as was the case at the height of the euro zone’s sovereign debt crisis.

However, the levels for the fiscal multiplier claimed by Mr Blanchard in that paper are still well within the limit set by the ECB economists’ model. The economists’ research also acknowledges that spending multipliers in Spain were higher during recessions than in boom times.