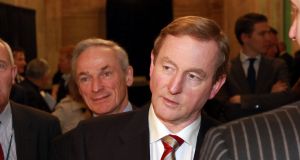 Taoiseach Enda Kenny: Ireland’s concern to ensure its closest neighbour and most crucial trading partner stays in the EU means he has influence on the matter in talks in Brussels. Photograph: Nick Bradshaw

A long period of uncertainty is in prospect for Ireland ahead of Britain’s EU referendum. Numerous imponderables are in play, but it is already clear that the affair carries huge potential to threaten Ireland’s advancing recovery.

In question first is whether prime minister David Cameron can prise an agreement from EU leaders to present as a meaningful deal to reframe Britain’s membership of the union.

Some kind of arrangement seems likely. But that only raises the most crucial question of all: would Cameron be able to sell such a deal to ambivalent voters in the referendum?

Between then and now there will be plenty of noise. After a dire warning from the Economic and Social Research Institute of grave consequences for Ireland if Britain votes to repudiate the EU, the implications are clear.

Big trade losses would be likely, alongside falling wages, rising prices, passport controls at the Border and an assortment of other woes.

In some assessments, indeed, this hypothetical threat now presents deeper questions for international investors than the outcome of the general election.

Furthermore, other leaders will bring their own demands to the negotiation. There will be a push for a deal by Christmas , but success looks unlikely. This one seems set to run right into next year.

Whatever the outcome of the political talks, the referendum is not expected until the third quarter of next year. That will only drag out the uncertainty.

No matter what anyone says, it’s simply not possible at this point to predict the result. The battle lines are clear, however. To cite one close observer, the “unenthusiastic” voices of caution will campaign to stay in the EU against the “emotional” argument that Britain is better off outside it. That Europe’s escalating migration emergency comes on top of a long economic crisis does not help the EU camp.

In some ways, indeed, the situation for us is akin to watching a gang of unknown builders carry out major renovations on the house next door. One false move and your own gable wall comes crashing down – and there’s little enough you can do about it.

But it’s not quite that simple. In contrast to Dublin’s insistent silence on the Scottish referendum, the appearance in London next week of Taoiseach Enda Kenny at the Confederation of British Industry conference marks an attempt to influence public debate.

In addition, Ireland’s fundamental concern to ensure its closest neighbour and most crucial trading partner stays in the EU means Kenny has some influence to wield in talks in Brussels. To the extent that Irish interests are not infringed by any new deal for Britain, Kenny will assist Cameron in the summit chamber.

There is a further point to be made on self-interest, however, for British voters. ESRI analysts and others believe the biggest economic loss after a “Brexit” would be incurred by Britain itself. Such assessments are bound to influence the plebiscite, although Irish experience shows that referendum debates can be swayed quite radically by issues unrelated to the core question.

A close contest is assumed. In a report analysts at Morgan Stanley said “substantial uncertainty” over the outcome would fan higher asset price volatility and a slowdown in Britain’s economic growth in mid-2016.

Morgan Stanley said a vote to remain in the EU would trigger a growth uplift and a relief rally late in 2016.

However, a vote to leave the EU would hit economic activity and asset performance. The going will be rocky enough next year – and it could get worse.