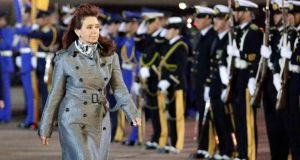 Argentina came out swinging today against the US judge overseeing its debt default case, in defiance of a threatened contempt order, and disappointed market hopes it might soon restart talks with the hedge funds suing the country.

A group of holdout investors have sued the South American country for full repayment on bonds that went into default in 2002. The funds rejected debt restructurings in 2005 and 2010, holding out for better terms.

US Judge Thomas Griesa, overseeing Argentina’s long-running battle with the funds, said in New York on Friday that he would issue a contempt order unless the government stopped claiming it had met its obligations and was not in default.

Far from backing off of those assertions, cabinet chief Jorge Capitanich said Judge Griesa had been paralysed by his own lack of understanding of the case and that no new talks had been scheduled with the hedge funds. “The proper conditions do not exist to negotiate,” Mr Capitanich said.

Holders of restructured bonds have asked Griesa to release money that Argentina had deposited in June, intended as a coupon payment. Capitanich criticized the judge for not acting on those requests. “His lack of decision clearly comes from not understanding the process, not understanding Argentina’s status as a sovereign country, not understanding that his actions violate sovereign immunity, which transcends judicial concerns and enters the realm of international relations, which are managed by the executive branch of the US government,” Mr Capitanich said.

Judge Griesa called the deposit illegal and ordered the money frozen. As a result, Argentina effectively missed the coupon payment after a grace period ended on July 30th, pushing it into default on its restructured debt. With no negotiations scheduled, the case was in limbo while international banks struggled to reach a deal to buy some of the Argentine debt held by the hedge funds led by Elliott Management Corp and Aurelius Capital Ltd. “The judge cannot issue an order of contempt because he cannot enforce it against a sovereign country,” Capitanich said. “He cannot embargo the funds because they do not belong to Argentina, but to the (restructured) bondholders. The judge cannot make any decision because he knows he would be effectively violating contracts,” he added.

“The only thing he is doing, at the express instruction of the vultures, is to block the payment process after Argentina met its obligations,” Mr Capitanich said. Argentina has long accused the judge of overstepping his bounds and being partial toward the funds, which bought Argentine bonds at steep discounts and are characterized by president Cristina Fernandez as “vultures” out to wreck her country’s finances in their pursuit of huge profits. The case could get a lot messier should holders of Argentina’s newly defaulted debt decide to declare principal and interest immediately due.

The move, known as acceleration, could complicate efforts to put the country’s debt woes to rest. An acceleration on the restructured bonds would also deal a blow to the hedge funds in the case, who could suddenly have to share their claim with a much larger pool of investors.

The International Swaps and Derivatives Association (ISDA) Determinations Committee had a conference call scheduled for Wednesday to discuss the next step in settling the prices on what investors will receive for credit default swap contracts on Argentine debt, a side issue to the main dispute.