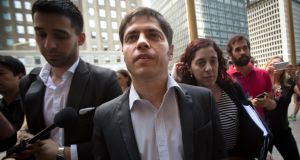 Argentina saw its credit rating cut to “selective default” by Standard & Poor’s as talks between government negotiators and US creditors to avoid a new debt crisis broke up last night without agreement.

The ratings agency considered Argentina to be in default after it failed to make a US$539 million (€402 million) interest payment due yesterday to holders of a bond maturing in December 2033. The development risks exposing the country to billions of euro in legal claims and deepening a recession.

The downgrade came as talks between the two sides were still under way but the meeting ended shortly afterwards without a deal to limit the impact of S&P’s move and allow a final settlement between Argentina and the last holders of bonds it defaulted on in 2001.

These holdouts had refused to participate in a 2005 restructuring of the country’s debt and won a ruling in the US that prevents Buenos Aires servicing bonds issued as part of that deal unless they received $1.5 billion (€1.12 billion) in full payment for their paper as well.

Argentina had deposited the money to service the restructured debt at a New York bank but a US judge had forbidden distribution of the cash unless it also paid up the holdouts.

Argentina’s finance minister Axel Kicillof said at a press conference last night that he had offered to reopen the 2005 deal to the holdouts but that they refused. Formed by a group of US hedge funds that bought the bonds at distressed prices after the 2001 default, the holdouts had always argued the country could afford to pay more.

Mr Kicillof said despite the failure to reach an agreement before yesterday’s deadline the government will look for other ways of paying the interest to holders of restructured bonds.

The break-up of negotiations without a deal dashed growing hopes of a settlement during the day that had driven Argentina’s stock market higher and seen the peso strengthen against the dollar.

Mr Kicillof’s presence at the talks was taken as a sign that a resolution was close. Though he has long been adamant that the government would not cave into the demands of what it calls vulture funds, the minister helped forge the agreement between Argentina and the Paris Club of leading creditor nations earlier this year to settle the country’s arrears with the group and also arranged a financial settlement with Spanish oil giant Repsol after its Argentine subsidiary was nationalised.

Optimism was further fuelled by reports of a plan by Argentina’s banking association, responding to a request from the government, to engineer a bond swap that would see local banks buy performing government paper and swap it for the defaulted debt in the hands of the holdouts.

The proposal would see the Argentine banks drop the legal action and, being private entities, the deal would not trigger a “rights upon future offers” clause in the 2005 restructuring deal which obliges Argentina to extend any improved deal it made to holdouts to those who have already settled.

1 Corona beer firm reeling after 8% slide due to coronavirus
2 Life as a Facebook moderator: ‘People are awful. This is what my job has taught me’
3 Why Irish banks are now looking beyond vulture funds on problem loans
4 Pharma giant AbbVie warned Government against ‘unfair’ €572m tax bill
5 We have little chance of building enough homes to meet election promises
6 Digicel plots network-sharing deal amid ‘tight’ cash levels
7 Survey finds shift from cash to its virtual equivalent now at tipping point
8 Former Glanbia boss joins board of Goodman’s ABP Food
9 Flight attendent seeks High Court injunction against Aer Lingus
10 How well paid do you think you are? Here’s how to work it out
Real news has value SUBSCRIBE