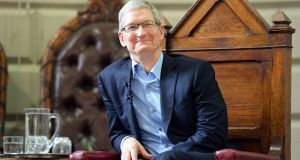 Speaking to CBS news programme 60 Minutes, Mr Cook rejected the belief by members of Congress that the company pays little or no tax on $74 billion (€68bn)  in overseas revenue, money that is held in Irish subsidiaries of the California-based company.

“That is total political crap. There is no truth behind it. Apple pays every tax dollar we owe,” he said on the programme that will be broadcast on Sunday.

“We pay more taxes in this country that anyone.”

American multinationals have been criticised by US politicians for keeping an estimated $2 trillion offshore in lower-tax jurisdictions such as Ireland to avoid paying the US corporate tax rate of 35 per cent.

The European Commission is still investigating whether the Government offered illegal preferential tax terms to Apple. The investigation is part of a crackdown on corporate tax avoidance across the European Union.

He said that he would “love to” bring the money back to the US but he can’t “because it would cost me 40 per cent [in taxes] to bring it home, and I don’t think that’s a reasonable thing to do.”

“This is a tax code, Charlie, that was made for the Industrial Age, not the digital age. It’s backwards. It’s awful for America. It should have been fixed many years ago. It’s past time to get it down,” he said.

Republican and Democrats acknowledge that the US tax code needs to be reformed but disagree over how to go about doing it.

Reform of the complex tax code has become an election issue with candidates condemning US companies that merge with overseas competitors in low-tax countries to avoid American taxes in a practice known as corporate inversions.