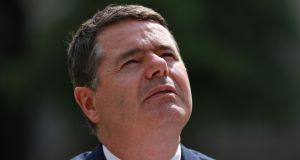 Fergal O’Brien of Ibec says Minister for Finance Paschal Donohoe, above, should cut capital gains tax to 12.5 per cent in order to help entrepreneurs and to lure investment to indigenous companies. Photograph: Nick Bradshaw

Fergal O’Brien, the group’s director of policy and public affairs, pointed out that while multinationals in the Republic continued to thrive, many Irish industries had yet to realise their potential.

He argued that Budget 2020 should include “something really visionary in terms of indigenous industry” to boost start-ups and aid small enterprises in getting to the next stage of development.

Mr O’Brien said that the Minister should cut capital gains tax to 12.5 per cent – from 33 per cent – to help entrepreneurs and to lure investment to indigenous companies.

“Helping them to attract and retain talent is a really big issue,” Mr O’Brien added. “We have got to create a different incentive scheme to allow employees to share benefits and tie their interests to the company.”

Gerard Brady, Ibec’s chief economist, noted that Irish small and medium-sized businesses depended more heavily on banks for finance than those in other European countries.

He said that reforming the Employment and Investment Incentive Scheme (EIIS), which offers tax breaks to those put cash into smaller homegrown companies, could help such enterprises lure more capital.

Ibec wants the Government to increase the limit on what investors can put into a scheme to €2 million from €150,000, which the organisation says “severely restricts the flow of capital to firms”.

Mr Brady also recommended that the Government rework research and development tax credits to allow smaller companies overcome the administrative cost of getting the incentive.

Both urged the Government to prepare to help the Irish businesses facing the biggest threat from a no-deal Brexit and to ensure the EU cleared any proposals under its state aid regulations.

Mr Brady said that many of the most vulnerable businesses had older, less skilled workers, who face difficulty finding new jobs should their employers close.

Mr O’Brien predicted that the Organisation for Economic Co-operation and Development’s plans to limit multinationals’ ability to avoid tax would reduce the Republic’s advantage over rivals for multinational investment.

He suggested that while the trends that increased the corporation tax take by €14.3 billion over the last four years could continue for a while, they would peter out relatively soon.

Mr O’Brien and Mr Brady pointed out that the Government had used €11.5 billion of the extra cash for day-to-day spending, much of it on the health service, and risked missing an opportunity to invest for the future.

“In terms of this surge in revenue, we have to target the strategic, productive areas of the economy,” Mr O’Brien warned.

He said that the Government should spend the extra corporate tax revenues on infrastructure, education, innovation and improving the overall quality of life in the Republic, which would become more important to multinationals as the Republic’s tax advantage slipped.