Starwood to acquire stake in Windmill Lane site for €4.9m

Site at Dublin’s south docks to be developed into 120,000 sq ft of office space and 15 residential units 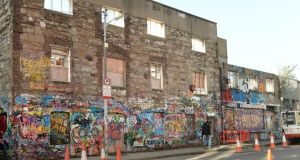 The Windmill Lane site, which was once home to a recording studio used by U2, the Rolling Stones, Tom Jones and Van Morriso. Photo: Cyril Byrne/The Irish Times

Property investor Hibernia Reit is to develop more than 120,000 sq ft of office space at Windmill Lane in Dublin’s south docks, as part of a joint venture with Starwood Capital.

The site, which was once home to a recording studio used by U2, the Rolling Stones, Tom Jones and Van Morrison, is to be developed into 15 residential units along with 7,000 sq ft of retail space and 120,000 sq ft of offices.

Hibernia acquired the site from US investor Starwood for €7.5 million in June 2014.

At the time, Starwood was granted an option to buy back in as a 50:50 joint venture partner at purchase price plus a return of 7 per cent, plus costs incurred to date by Hibernia. Starwood will now pay €4.9 million for a 50 per cent stake in the site.

Hibernia said it is targeting completion of the development of the site by the end of 2017.

The company said demolition of the iconic studios has been completed, and a building contractor is expected to be appointed shortly.