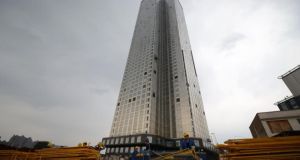 It’s been less than a year since Asia Briefing visited Changsha, the capital of Hunan province, but in that time the skyline has changed dramatically with the construction of Mini Sky City, a 57-storey building. The construction took just 19 days.

It’s the world’s tallest prefabricated building, knocked up in record time by 1,200 workers, with 800 apartments, working space for 4,000 people and a series of tall atriums.

The sections of the building were constructed off-site and then assembled, and it is 200m tall. There has been debate online about whether it is safe, but its proponents say it is sustainable and environmentally friendly.

It was originally supposed to be 90 storeys but the height was reduced because it is near the airport. It still stands out as you leave the city for the airport but looks no different from other skyscrapers going up around China.

He Youxian, an executive overseeing the project, told China Daily the building can withstand 9-magnitude earthquake. Broad Construction Group, which built it, previously built a 30-storey building in 15 days.

1 Ireland has EU’s most progressive tax system, study finds
2 MEPs reject Central Bank’s Gerry Cross for key banking role
3 Promises promises: There probably wont' be enough cash to meet election pledges
4 Who are Ireland’s 17 billionaires?
5 Are there annual limits on inheritances or gifts to a child?
6 Davos: OECD confident on digital tax deal as France takes swipe at Ireland
7 Aldi to implement living wage for store employees
8 Are you a Monica, Joey or Chandler when it comes to your data privacy?
9 On your bike: Dropbox backs Dublin Cycling Campaign
10 Doomsday Clock counting down remaining time left for civilisation
Real news has value SUBSCRIBE