Profits at civil engineers Ward & Burke up to €8.1m 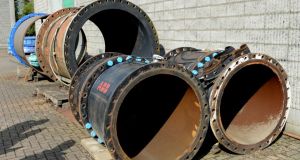 Galway-based Ward & Burke has operations in the Republic, Canada and Britain and specialises in sanitary and water services, for which it designs and builds treatment plants, tunnelling and pipelines. Photograph: David Sleator/The Irish Times

Accounts just lodged with the Companies’ Registration Office show profits at the group more than doubled in 2014 to €8.1 million from €3.25 million while sales rose 37 per cent to €104 million from €76 million.

Galway-based Ward & Burke has operations in the Republic, Canada and Britain and specialises in sanitary and water services, for which it designs and builds treatment plants, tunnelling and pipelines.

A spokesman confirmed that revenues in Canada rose 81 per cent to €47.3 million last year, while sales in Britain were up 30 per cent €25.4 million. Its Irish turnover increased 1 per cent to €31.2 million.

Ward & Burke invested just short of €11 million fixed assets, with €9 million of this coming from its own working capital.

On average, the group employed 273 workers during the year, although its spokesman said this can rise to a peak of 400, in line with contractual commitments. Employees’ pay totalled €18.5 million.

While its Canadian and British operations continued to grow, its Irish business played a key role in supplying them with products and services.

It has 30 steel fabricators working in Creggs and Tuam, backed up by 25 administrative staff in Kilcolgan. They provided more than €4 million worth of products and services to its overseas companies.

All its building workers and engineers are are trained in micro-tunnelling, caisson construction and heavy civil engineering. Ward & Burke recently completed the longest ever micro-tunnel produced in a single drive in North America.

Ward & Burke has worked on projects such as the Leixlip-Ballycoolen water supply scheme and the Ballina main drainage scheme. Clients in Britain have included Scottish Water, Yorkshire Water and Thames Water.

“The company is confident in its outlook for 2015, particularly with its operations in Canada and the UK. The market in the Republic remains challenging, tendering opportunity being the single biggest obstacle to increasing turnover and developing resources,” its spokesman said.

1 Moving in and out of lockdown is a recipe for economic disaster
2 Stripe lures Dhivya Suryadevara from General Motors to be CFO
3 UK tips into deepest recession on record after 20% contraction
4 Shed Distillery in Leitrim to open €3m visitor centre next month
5 KBC Ireland chief feels heat from big tech in race for relevance
6 General Motors loses rising star after shock move to Stripe
7 How to . . . transfer your game data to a new console
8 US ‘hard seltzer’ drink White Claw launches in Ireland
9 Isle of Man company used by Denis O’Brien featured in Paradise Papers
10 Glanbia sees sharp decline in earnings due to Covid-19 crisis
Real news has value SUBSCRIBE