PM Group has plan to hire 500 graduates over five years 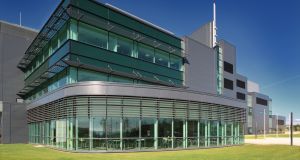 Janssen Biologicals in Cork: The building was co-engineered by PM Group

Project manager PM Group is working on the first stage of a plan to hire 500 graduates to aid its projected growth over the next five years.

The group, whose business is overseeing large engineering projects for the pharmaceutical and manufacturing industries, said that pre-tax profits rose 33 per cent last year to €12.6 million.

Speaking after it published its 2015 accounts, Dave Murphy, chief executive of the Dublin-headquartered business, confirmed that it was hiring 500 engineering, architecture and construction graduates over the next five years.

“We have already hired 100 this year, and we are moving on to hiring for next year,” he said on Tuesday.

The 500 new jobs will split roughly 50/50 between Ireland and its operations in Britain, Europe, the US and Asia.

He noted that the calibre of Irish graduates was “very, very high” despite reports that universities were slipping in global rankings. “The people fit in very well and get productive within about six months.”

PM’s overseas operations account for 55 per cent of its business. About 20 per cent is in Britain. Finance director Larry Westman acknowledged that the uncertainty around Brexit posed some risk, but said a key UK client, Glaxo Smithkline, was continuing to invest.

In Ireland it is working on biotechnology specialist Alexion’s expansion in Blanchardstown and the waste-to-energy plant at Poolbeg, Dublin. It has a large presence in Cork where many of its pharmaceutical clients are based.

Commenting on its 2015 performance, chairman Dan Flinter highlighted the fact that the group bought out Amec Foster Wheeler’s 24.6 per cent stake in the business. “The outcome of this initiative means that PM Group is now 100 per cent owned by our employees.”

Landlords and tenants must work together in the face of coronavirus