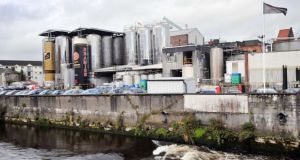 The 6000-seat venue will be built on the site of the former Beamish and Crawford brewery in Cork city centre. File photograph: Daragh Mc Sweeney/Provision

An Bord Pleanála has granted planning permission for the €80 million, 6,000-seat event centre on the site of the former Beamish and Crawford brewery in Cork city.

Cork County Council had given the green light for the project last year. However, two last minute appeals were lodged with the planning authority.

The developers BAM lodged an appeal on one of the planning conditions. There was also a last minute appeal by a third party applicant.

The applicant expressed concern abut the historic integrity of the area being compromised if the development went ahead as planned.

The applicant claimed that not enough was being done to showcase the site’s Viking heritage.

Meanwhile, BAM lodged an appeal against a special development contribution of almost €1.7 million imposed as a condition by the council for the provision of a new pedestrian bridge between French’s Quay and Crosse’s Green.

Bord Pleanála have said that the development can proceed with conditions.

The developers had argued that the bridge at Crosse’s Green was already included in the city council’s development plan. However, the board’s planning inspector disagreed with this argument.

“It is my view that the payment of a special contribution towards the construction of two pedestrian bridges from the site to French’s Quay and Crosse’s Green and public realm improvements at the western landings of both bridges and on South Main Street would be appropriate.”

Bord Pleanála also indicated that the event centre would not impact negatively on the archaeological heritage of the site.

Questioned by a listener on Newstalk about the stalled project, Mr Martin spoke of his commitment to seeing the centre through to completion.

“I am very conscious that before the last general election Fine Gael came down with Ministers and dug an imaginary sod in the ground. We all thought that construction was going to start in the following weeks.

“Nothing has happened in the last four years in terms of any construction for the events centre. It would have been a very important project for the wider city and its renewal and I am committed to getting it done.”

It is hoped that work on the centre could begin within months after it emerged that the State is poised to more than double its original investment to €50m.

The saga first started in 2014 when a tender for €20m of State aid was awarded to BAM Property. The sod was turned in February 2016 by then taoiseach Enda Kenny.

The project has been mired in controversy for some time due to lack of progress on the site.