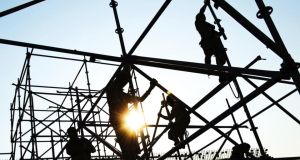 Since the late 1960s and early 1970s, thousands of construction workers in Britain were fired from jobs or not hired because they were members of trades unions or seen as politically suspect. Photograph: Thinkstock

Eight major building firms, including Laing O’Rourke, run by Irish businessman Ray O’Rourke, have been accused by a House of Commons inquiry of “misleading and callous” conduct towards blacklisted workers.

Since the late 1960s and early 1970s, thousands of construction workers in Britain, including hundreds of Irish ones, were fired from jobs or not hired because they were members of trades unions or seen as politically suspect.

A major campaign has been under way to secure compensation. Last year, the eight companies set up a compensation scheme, but they implied on the day it was launched that trades unions had signed up for it.

However, chair of the Commons’ Scottish affairs committee Ian Davidson said the scheme’s creation was “an act of bad faith”, motivated “by a desire to minimise financial and reputational damage rather than being a genuine attempt” to deal with past crimes.

It offered “low levels” of compensation, he said, while workers who had joined a High Court action against the companies were refused access to it. It also failed to provide help to retrain workers, many of whom had been unable to get work for years.

“To mislead MPs is a serious issue but to mislead blacklisted workers and their families by implying that the trade unions were in agreement with the scheme is both callous and manipulative,” said the Labour MP.

The hub of the blacklisting operation lay with a secretive organisation known as the Consulting Association, run by Ian Kerr, though he died before he was due to give evidence.

Hundreds of Irish workers were denied employment during the 1970s on the back of allegations being made against them by police and intelligence agencies who wanted Irish kept away from sensitive sites.