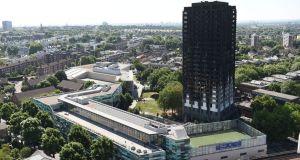 The Grenfell Tower in west London, which was destroyed by fire. Photograph: David Mirzoeff/PA Wire

A fire expert warned a UK national construction body that the increasing use of flammable materials on high-rise buildings was “an accident waiting to happen” around three years before the Grenfell Tower blaze, an inquiry has heard.

The inquiry has heard the firm marketed its foam Kooltherm K15 insulation with fire test certificates which did not represent the product being sold.

A newer version of combustible K15 sold from 2006 onwards was observed by Kingspan employee Ivor Meredith as having “burnt very ferociously” in one failed cladding test, but the firm persisted in using a 2005 test pass from an older version of the product to sell the newer one, the inquiry has heard.

Raising concerns about K15, the NHBC wrote to Kingspan in October 2014 outlining why combustible material was so risky for high-rise buildings, outlining factors including occupants being asleep and issues over fire alarms and evacuations.

Dr Lane, of engineering consultants Arup, had been engaged by Kingspan to ratify its test data, but she was unable to “positively review” it, the hearing was told on Thursday.

The fire expert warned the NHBC: “Arup are actually deeply concerned about the lack of understanding of assemblies and the ongoing incorrect use of test reports for individual materials being applied to more complex building envelope forms.

“The use of highly combustible materials in residential buildings is now simply an accident waiting to happen.”

Tony Millichap, the Kingspan technical lead between 2010 and 2015, told the inquiry he did not recall being aware of her comments at the time.

In February 2015, after the NHBC said it may have to advise builders not to use K15 due to a lack of evidence about its fire safety, Kingspan got its solicitors to threaten legal action against them, the inquiry heard.

Kingspan’s solicitors warned the NHBC that advising clients not to use the product would amount to “actionable negligible misstatements” and would “cause our client very significant financial loss”.

At the time of the discussions, the material was being specified for use on hundreds of building projects, the inquiry heard.

Dr Lane has been called as an expert witness during the Grenfell Tower inquiry.

The 2005 test report was withdrawn by Kingspan in October this year.

Kingspan said: “It became apparent that the K15 manufactured in 2005 would not be representative of the product currently sold on the market from 2006 to today.”

The firm has acknowledged “process shortcomings during the period of 2005 to 2014 for which it sincerely apologises”.

But it said building regulations at the time permitted K15’s use on tall buildings providing the overall cladding system was compliant.

The company has said it did not provide any advice about the suitability of K15 for use on Grenfell Tower and that the firm only learned a small amount of the insulation had been used on the building after the June 2017 fire, which killed 72 people.

The bulk of the flammable insulation used on the tower was made by rival firm Celotex. – PA