CRH to proceed with $3.5bn acquisition of US cement maker Ash Grove 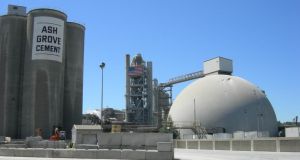 CRH’s acquisition of US group Ash Grove is expected to close late this year or early next year.

Construction giant CRH said on Monday that it would go ahead with its $3.5 billion (€3 billion) acquisition of the fifth-largest US cement manufacturer, Ash Grove Cement following approval from shareholders in the US company.

The deal, which remains subject to regulatory approval, is expected to close late this year or early next year. It is the biggest deal for the Irish construction company – already the world’s third-largest building materials supplier – since it paid €6.5 billion for businesses sold off by rivals, Holcim and Lafarge, following their merger in 2015.

CRH reached an agreement on September 21st to acquire Ash Grove. However, the Kansas-headquartered company extended shareholder approval until October 20th, raising fears that CRH could get into a protracted bidding war and possibly end up losing out on the deal.

These fears rose when Summit Materials, a rival founded by one of the Irish group’s former executives, Tom Hill, entered the bidding process in early October, with a non-binding offer between $3.7 billion and $3.8 billion.

A formal bid failed to materialise from Summit by the Friday deadline. Ash Grove, whose board had previously approved CRH’s $3.5 billion bid unanimously before Summit’s approach, had not named the rival suitor when it extended the period during which it was able to look for other potential buyers.

However, it named Summit on Friday, saying it had provided confidential information to the Denver building materials group following its unsolicited offer but that Summit had not submitted a definitive proposal by the deadline at the close of US markets.

In a statement to the Irish Stock Exchange ahead of the opening of European markets on Monday, CRH confirmed that it had secured approval for its bid and that further details would be forthcoming in its trading update of November 21st.

Ash Grove is one of the biggest cement producers in the US. Last year it earned profits of $215 million and had assets of $2.5 billion.

In a note, Davy said the acquisition was a “real coup” for the Irish company.

“The deal is strategically important, reducing the group’s dependence on third-party producers,” the broker said, adding that Ash Grove would be about 7-8 per cent accretive to EPS [earnings per share] without stretching the balance sheet.

“The acquisition will catapult CRH into the top three cement producers in North America and reduce its dependence on expensive third-party cement purchases,” the broker said. – (Additional reporting: Reuters)