Government will ensure there are ‘no unintended consequences’ from budget measure 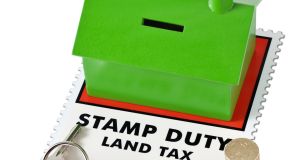 Budget measure: Stamp duty on commercial property including development land will increase to 6 per cent this week from 2 per cent. Photograph: iStock.

The Government will clarify key questions about the new stamp duty rates on commercial property shortly, according to the Minister for Housing Eoghan Murphy.

Minister for Finance Paschal Donohoe announced on Tuesday that stamp duty on commercial property - including development land - would increase to 6 per cent this week from 2 per cent.

His colleague Mr Murphy said on Thursday that the Government would deal with questions around a proposal that anyone buying land for residential building would be able to claim back the duty that they pay.

Announcing the rate rise, Mr Donohoe said that buyers could reclaim the duty once they started residential building within 30 months of doing the deal.

However, that has prompted questions from the building industry about what happens in cases where developers build both new homes and offices and shops on the same site.

Mr Murphy said that the Government would look at the proposal and ensure that “there are no unintended consequences”.

He was speaking after addressing the Construction Industry Federation annual conference, where he confirmed that the Government planned to publish its proposed national planning framework by the end of the year.

The framework would form the basis of planning around the Republic, and particularly in the key urban areas that the coalition has earmarked for growth.

It will include provision for greater density housing in cities such as Dublin, Cork, Limerick and Waterford.