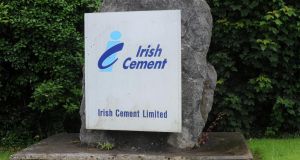 Judge grants CRH, Seamus Lynch and Irish Cement an injunction restraining CCPC from accessing some of the documents and files it seized. Photo: Laura Hutton/Photocall Ireland

State investigators investigating alleged breaches of competition law who launched a “dawn raid” last year at CRH’s Irish Cement plant in Drogheda breached the terms of their warrant by seizing the contents of the email account of Seamus Lynch, the head of CRH’s businesses in Ireland and Spain, the High Court has said.

In a blow to the power of the Competition and Consumer Protection Commission (CCPC) to seize entire email accounts as part of investigations, the court also found that it would be in breach of the European Convention on Human Rights and the Constitution if it were to review the disputed contents of Mr Lynch’s account.

The court said this is because his email account would also likely contain private information and information about CRH’s businesses that is nothing to do with the CCPC investigation into Irish Cement.

Mr Lynch, who was formerly managing director of Irish cement and is its current chairman, is involved in several other parts of CRH’s operations.

In a judgment delivered yesterday, Mr Justice Max Barrett also granted CRH, Mr Lynch and Irish Cement an injunction restraining CCPC from accessing some of the documents and files it seized. He said it is not entitled to “trawl” the material.

The injunction is pending an independently-managed process to “sift” the material to exclude information that does not specifically refer to the operations of Irish Cement.

CRH did not make any comment following the judgment.

The CCPC, meanwhile, is understood to be considering whether to appeal the ruling to the Supreme Court.

Two days before the raid, CCPC got a district court warrant on the basis that it might uncover evidence of anti-competitive practices in the bagged cement market.

At 10am on the day of the raid, three investigators and two gardaí arrived unannounced at the Irish Cement plant, and asked for the most senior staff member present, who then rang Arthur Cox solicitors.

The investigators sought the email accounts of four people, including Mr Lynch’s “crh.com” account. It took until noon to procure the information.

In the meantime, Arthur Cox lawyers arrived to represent the company, and a debate ensued over whether the investigators could take Mr Lynch’s email account because of his dual roles.