Cairn and Glenveagh directors miss out on lucrative founder shares 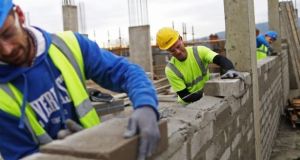 The founding directors of Cairn Homes and Glenveagh Properties missed out on receiving millions of euro worth of shares in the State’s two biggest house builders last year, according to their latest annual reports, as their stocks failed to make a sufficient recovery from a sell-off in late 2018.

Cairn Homes, founded by chief executive Michael Stanley, his brother Kevin, and Scottish serial entrepreneur Alan McIntosh, floated in 2015 with the most potentially lucrative incentive scheme on the Iseq, entitling the trio to up to 20 per cent of total shareholder returns, including share-price gains and dividends, over seven years.

It allowed the three to convert 100 million of so-called founder shares into ordinary stock over the period, subject to a 12.5 per cent total shareholder return being achieved annually over the period. Some 80 per cent of the shares had converted by mid-2018, and the founders had raised almost €50 million selling some of their shares between September 2017 and last April.

However, Cairn’s shares had not recovered enough from a slump in late 2018 to meet the shareholder return requirement to trigger further conversions last year.

Still, chief executive Michael Stanley’s remuneration rose to €966,000 last year from €920,000 for 2018, as he received a bigger cash bonus, according to the company’s latest annual report, published on Friday. It came as operating profits at the house builder jumped 28 per cent to €68 million as house sales rose to 1,080 from 804 for 2018.

While an initial 18.99 million founder shares were converted into ordinary shares in 2018, the company did not meet the requisite stock performance target to trigger another conversion last year.

However, the company’s annual report, also published on Friday, showed that former chief executive Justin Bickle, who stepped down from the board last August but remained an employee until January, saw his remuneration jump to €1.05 million from €719,500, boosted by a higher cash bonus and €225,000 payment in lieu of notice.

Mr Bickle, a former senior official with US private equity firm Oaktree, which rolled some of its Irish land assets into Glenveagh at the time of the flotation, continues to be entitled to benefit from the founder-share scheme.

Cairn Homes decided earlier this week to scrap its final €20.6 million dividend for 2019, freeze a share buyback programme and suspend its full-year earnings guidance as its target of selling 1,300 home sales this year will be hit by the coronavirus crisis.

Glenveagh, which had aimed to sell 1,000 homes this year, moved on Thursday to suspend all its guidance to investors until the pandemic’s impact is clearer.

Both companies are continuing to build but the rate at which people are reserving new homes has slowed.