Builder says developments not possible without establishment of State agency 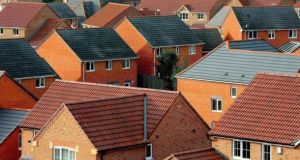 Gerry Gannon was one of Ireland’s most prominent house builders in the boom years through his company, Gannon Homes. Photograph: PA

Property developer Gerry Gannon has told the Oireachtas banking inquiry that his companies have built 140 family homes in the past 18 months and has plans in place for other sites in the Dublin area.

In a written statement provided to the inquiry and published yesterday, Mr Gannon said these developments would not have been possible without the establishment of Nama, where his loans were transferred in 2010.

Mr Gannon was one of Ireland’s most prominent house builders in the boom years through his company, Gannon Homes.

By September 30th 2008, the night of the government’s bank guarantee, his companies owed €214 million in Ireland and £22.3 million in the UK. About two-thirds of his borrowings were with Anglo Irish Bank but he also had relationships with Irish Nationwide Building Society, AIB and Bank of Ireland.

He controlled about 5,700 residential sites and had about 1 million sq ft of commercial space waiting to be developed.

Mr Gannon said it was an “entrepreneurial-led enterprise” employing less than 20 staff at its core, with many activities outsourced. “The bulk of my business was carried out as a sole trader,” he added.

Mr Gannon said relations with Nama were “challenging at the outset” but they “both persevered and ultimately developed a solid working relationship”.

Separately, developer Peter Cosgrave of the Cosgrave Property Group said Nama’s establishment had “enabled his company to continue as an enterprise and has facilitated it recovering from the economic crisis”.

The group’s largest lender before the crash was AIB. It owed the bank €687.5 million at the time of the guarantee from a total of €2.2 billion in debt.

In addition, €2,630 was given to Fianna Fáil at a fundraising event, along with €1,000 to the Brian Cowen golf classic, and other sums to individual TDs of both Fianna Fáil and the PDs. Fine Gael received donations of €6,000 plus €1,000 in sponsorship fees.