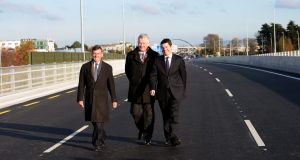 Accounts just filed for BAM Contractors Ltd show turnover rose by about 10 per cent to €385 million while pretax profit almost doubled to €10.7 million.

BAM’s accounts state that turnover in Ireland fell marginally but its international income grew significantly from collaboration with sister companies in the Royal BAM group and other joint venture entities.

The accounts show BAM had healthy cash balances of €109 million at the year end and no external bank debt. Its corporation tax bill rose to €1.6 million last year from €624,000 in 2014.

BAM continued the process of reducing its focus on public works last year, increasing its revenue from private sector contracts by 32 per cent. Chief executive Theo Cullinane said the company had successfully developed its portfolio across the civil and commercial sectors.

“BAM has played a key role in the delivery of Ireland’s civic, education, and transport infrastructure in recent years through the PPP (public-private partnership) model, which we remain dedicated to,” he said.

“However, increasing our focus on our private sector business has been a necessary step for us because of the unfair risk allocation associated with the new forms of contracts for public works in Ireland. These results demonstrate that this refocusing has been highly successful.”

Looking ahead, Mr Cullinane said BAM has a “strong pipeline” of public and private activity. “BAM remains committed to investing in and delivering major social and productive infrastructural PPP projects, and we recently completed the N7 Newlands Cross and N11 Arklow to Rathnew PPP, and a number of school-bundles initiatives for which we have received international recognition,” he said.

In 2015, BAM was announced preferred bidder for the €400 million M11 Gorey to Enniscorthy and the N25 New Ross bypass PPP motorway projects.

BAM was also selected as preferred bidder on the €135 million courts bundle PPP project, which involves the construction and refurbishment of seven courthouses across Ireland.

In addition, it won a number of contracts in Northern Ireland and the Middle East.

BAM said 2016 had also been a “strong year” so far. It recently completed a significant new office development at 1 Albert Quay and commenced works on the Capitol Cinema site, both in Cork.

Works have commenced on One Molesworth Street in Dublin city for Green REIT and progress has been made on the construction of a major office building for an international client at Sandyford.

Established in 1958, BAM Ireland (formerly known as Ascon) is one of the State’s largest construction businesses, employing 2,000 workers directly and indirectly. Its main activities are building contracting and civil engineering in the public, private and PPP sectors. Other activities include facilities management, property development and rail infrastructure.