Elsewhere, Irish plans for Facebook and Fitbit, while NTMA considers new base 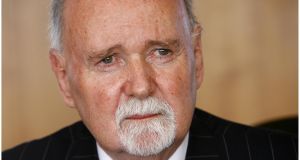 Fingleton ‘did not read’ files Michael Fingleton, former head of Irish Nationwide, argued that he should not be liable to repay a €5.5 million loan to AIB as he did not read the documents before signing them. However, Judge Marie Baker rejected his defence last week and said AIB was entitled to summary judgment against him for the amount owed, the Sunday Times reports.

Irish drinks group C&C has been linked to a possible bid for Matthew Clark, Britains’s largest drinks supplier to the pub trade, according to the Sunday Times.

Facebook is planning a €200 million data centre in Clonee, Co Meath which will employ about 100 people. It would be only the firm’s second data centre outside the US, the other being in Lulea, northern Sweden.

Meanwhile, Twitter is in talks with Green Reit about locating its European headquarters in a building at George’s Quay in Dublin, according to the Sunday Times. It pulled out of a planned move to a building on Baggot St owned by US group Kennedy Wilson.

Separately, it reports Sisk is in line for a €160 million deal to build an office and apartment scheme on the 4.8-acre Capital Dock site in Dublin planned by Kennedy Wilson.

Fitted out for 50 jobs

Fitbit, the wearable tech firm, is due to announce up to 50 jobs in Ireland, according to the Sunday Business Post. Last year it set up its European headquarters here. The Sunday Times reports the firm has shifted its intellectual property to Ireland to reduce its tax bill. The Times reports the group incorporated three Irish companies here and routes its manufacturing arrangements through Dublin.

The Central Bank was the victim of a transfer scam in December, according to the Sunday Independent. The attempted fraud involved the transfer of up to €1.4 million to a bogus account, which the bank believed to be a standard invoice payment to Danske Bank.The transaction was halted before the full amount was transferred but the Central Bank confirmed that up to €32,000 is missing and gardaí are investigating.

Marks and Spencers is to unveil its first increase in annual profits for four years, reports the Sunday Telegraph. It is expected to report a 4 per cent increase in underlying annual pretax profits to £648 million on Wednesday, according to forecasts.

The National Treasury Management Agency is looking for a new headquarters in Dublin, the Sunday Business Post reports. It may leave its base on Grand Canal St when its lease comes up for renewal next year.