No basis for O’Reilly to make asset disclosure, court hears 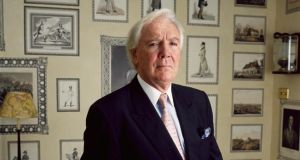 A bank seeking to recover debts from Sir Anthony O’Reilly has no evidential basis for seeking a court order requiring the businessman to make further disclosure on his assets, the Court of Appeal has been told.

Mr O’Reilly is appealing a High Court decision last June granting AIB an order for discovery in aid of execution of a €22.6 million judgment entered against him last year in favour of the bank. His total indebtedness to AIB now stands at about €15 million.

The three-judge Court of Appeal heard the appeal on Monday and will give its decision on Tuesday.

Bernard Dunleavy SC, for Mr O’Reilly, said AIB has been advised his client has €13.5 million in unencumbered assets which the bank could move against. Not only had it not moved against these assets, it had made no attempt to do so, counsel said.

AIB denies claims on behalf of Mr O’Reilly the application was made as part of a collateral attempt to embarrass the 79-year-old businessman.

It says Mr O’Reilly had an interim receiver appointed over unencumbered assets as part of an insolvency arrangement he entered into in the Bahamas where he is resident.

Mr Dunleavy, in submissions to the appeal court, said AIB had obtained a High Court order requiring the businessman – who underwent back surgery earlier this year in New York – to swear a new affidavit after a judge ruled there was nothing to stop him instructing lawyers and accountants to prepare the information.

Mr O’Reilly, who the court heard had been on round-the-clock painkillers following his surgery, then appealed that order.

Mr Dunleavy said AIB had sought the order in an attempt to “humiliate and embarrass” the businessman.

Counsel, in reply to a question from appeal court president Mr Justice Seán Ryan, said there was an ulterior motive behind the application and that should affect a court’s discretion whether or not to grant the order.

Mr O’Reilly provided AIB with a statement of assets, as he had done for all his creditors, as part of the businessman’s personal insolvency arrangement in the Bahamas, counsel said.

While there was a low threshold of evidence for the requirement for discovery in aid of execution of a judgment, AIB had presented no evidence, counsel said.

James Doherty, for AIB, said such discovery orders were not unusual in judgment order cases.

The bank had “been given the runaround” when it attempted to serve proceedings on Mr O’Reilly in the Bahamas where he says he is a permanent resident, counsel said.

A statement of assets furnished to the bank had not been prepared by Mr O’Reilly, but by someone else, and could never be sufficient to satisfy the discovery process, counsel said.

1 Joint accounts: if one of us dies, can the other access the money?
2 Working from home: New costs, new stresses and little relief
3 HSBC board rethinks overhaul and seeks even deeper cuts
4 We are ‘sale agreed’, but can we go back with a lower offer?
5 Investor alleges fraud over collapse in property fund value
6 Electrical contractors fear closure under new pay law
7 DAA offers workers up to two years’ wages in redundancy plan
8 Stocktake: History says this is not a bear market rally
9 Fierce debate brews as EU Commission lays out recovery plans
10 Merck leaps into Covid-19 development fray with vaccine, drug deals
Real news has value SUBSCRIBE