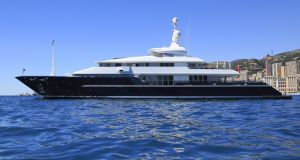 The MY ‘Triple Seven’ which is serviced by Global Yachting Group: the annual running costs for a superyacht can equate to about 8-10 per cent of the original cost of acquisition of the vessel

The private equity firm supported a management buy-out of the group, which is a leading provider of services to the world’s luxury yachts or “superyachts”.

Headquartered in Mallorca, the group specialises in painting and maintaining superyachts. It operates across Europe and the United States and has provided services to many of the world’s most high-profile superyacht owners. Mr Dargan said the annual running costs for a superyacht equate to about 8-10 per cent of the original cost of acquisition of the vessel, and yacht painting is the most expensive single element of maintenance spend.

He said the investment in the group comes at a time when the number of superyachts on the water continues to grow, in line with the increasing number of billionaires.

Last year, there were about 5,200 superyachts in operation and the fleet is expected to rise some 15 per cent to 6,000 by 2020, according to Superyacht Intelligence, while the number of billionaires is expected to rise by more than 30 per cent, from 1,700 to 2,500 over the same time period. “We invested in the Global Yachting Group because it has an experienced and proven management team, the sector is growing fast and the business is the leader in its field,” Mr Dargan said.

The company was formed following the 2014 merger of two well-known superyacht service businesses: Pinmar and Rolling Stock. The company had revenues of €50 million last year.

This is a third investment in 12 months for Lonsdale Capital Partners, which focuses on the smaller to mid-sized market in the UK and Europe, companies with an enterprise value of £10-£50 million. The company was co-founded by Mr Dargan, along with Ross Finegan and David Gasparro in 2009.

1 Opioid executive admits to ‘no morals’ ahead of prison term
2 Are there annual limits on inheritances or gifts to a child?
3 Who are Ireland’s 17 billionaires?
4 American YouTubers embrace the crisp sandwich
5 My father in a nursing home wants to gift me his house
6 Fallon & Byrne founders McHugh and Byrne exit group
7 NI businesses fear burden of post-Brexit red tape on goods transport
8 From chips to €14bn in trade: Ireland and Italy’s enduring exchange
9 South Dublin Credit Union members urged to borrow more to ensure survival
10 Ryanair wants Irish courts to block Skyscanner from selling its flights
Real news has value SUBSCRIBE