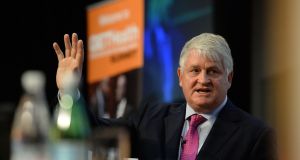 Denis O’Brien or his companies became entangled in an array of legal actions and controversies in 2015. Photograph: Dara Mac Dónaill

The past year was, without doubt, the most eventful yet in the entrepreneurial career of Denis O’Brien, who is Ireland’s richest and most successful businessman, most famous tax exile and perhaps her most vociferous litigator.

“On the field”, in business, O’Brien had a year of striking undulation. Failures such as Digicel’s abandoned $2 billion flotation contrasted with astounding successes, such as his near €450 million sale of Topaz, where he more than doubled his money in just two years.

Off the field, however, O’Brien or his companies became entangled in an astonishing array of bitter legal actions and public controversies, such as those concerning his banking arrangements with Irish Bank Resolution Corporation (IBRC) and the sale of Siteserv.

The State, RTÉ, the Sunday Business Post, the public relations firm Red Flag Consulting and the satirical website Waterford Whispers News were among those to feel the heat from O’Brien’s legal team, with varying degrees of success.

As the new year dawned last January, however, O’Brien was contemplating a response to perhaps the biggest challenge ever faced by Digicel, his pan- Caribbean mobile phone company, which has more than 13 million customers.

Cable & Wireless Communications (CWC), the regional incumbent that O’Brien traumatised in the early Noughties as he built Digicel into a regional powerhouse, had just agreed a $3 billion deal to take over Columbus International, a cable company backed by Liberty Global’s John Malone.

The deal created a major competitive obstacle for Digicel, which has poured more than $1.5 billion so far into fixed-line, cable and media investments as it diversifies away from mobile revenues.

O’Brien railed against the deal, which he argued was bad for competition. It was eventually passed in March by regulators in the region, creating a vibrant and well-resourced competitor for Digicel as it makes its fixed-line transition.

In the summer, he announced his intention to float Digicel on the New York Stock Exchange. The move was supposed to raise up to $2 billion to help cut Digicel’s debt mountain of close to $6.5 billion.

O’Brien was prepared to hand over 40 per cent of the equity – although barely any control – but the Digicel deal foundered in October amid stormy markets and a feeling among investors that it was overpriced.

A successful flotation would have been the crowning achievement of O’Brien’s career so far, and the U-turn must have been a bitter disappointment. He has vowed, however, to take Digicel back to the markets, possibly in 2016.

Meanwhile, at the World Economic Forum in Davos in January, O’Brien made a number of predictions. He said the United States Federal Reserve would not raise interest rates until “late 2015 or the beginning of 2016”. The Fed finally raised rates in the middle of December, so O’Brien was spot on there.

He also predicted, however, that oil would be $60 a barrel by year end.

Instead, it plunged in late December to about $37 a barrel, close to its lowest in more than a decade.

O’Brien was also asked in January where he would invest an imaginary $100 million. He said he would put $60 million in Russian internet company Yandex and $40 million into telco Vimpelcom.

Had he done so, O’Brien would be down about 10 per cent this month.

Back home, the spring months brought a whirlwind of negative publicity for O’Brien. After persistent parliamentary questioning from Independent TD Catherine Murphy, Minister for Finance Michael Noonan revealed that his department had concerns over the 2012 sale for €45 million by IBRC to O’Brien of Siteserv, a building services company.

The transaction included a €105 million debt write-off for Siteserv by the State bank, which elicited disquiet from critics who wondered whether O’Brien had got too good a deal.

A tranche of documents released to Murphy, which outlined the extent of the department’s concerns over IBRC’s handling of such deals, lit the fuse on the story in April and the Siteserv debacle dominated business and politics for much of the next month.

Siteserv may be problematic for O’Brien from a PR point of view, but financially it was a stellar investment. Renamed Actavo, it is growing strongly abroad. Profits last year were up 80 per cent while revenue was up more than a third to more than €323 million.

He won an injunction preventing the broadcast, but soon afterwards Murphy revealed the details and other purported aspects of O’Brien’s relationship with IBRC under privilege to the Dáil. This sparked a lawsuit by O’Brien against the State.

Over the year, O’Brien also raised cash by selling various assets, leading to speculation about why he appears to be trying to raise capital.

He sold his stake in Australian media company APN for €84 million in April, at the same time that Independent News and Media (INM), in which O’Brien is the largest shareholder, sold out to become debt-free.

BB’s Coffee and Muffins also went for about €10 million, and O’Brien also sold out of online recruitment business ChinaHR. He also considered, before retreating from, a sale of his Quinta do Lago golf resort for €220 million, and then there was the pulled Digicel flotation in October.

In early December, however, he scored a stunning success, selling his Topaz chain of forecourts to Alimentation Couche- Tard for a reputed €450 million. O’Brien bought its loans from IBRC for €150 million, before topping it up with the €75 million add-on of Esso.

It hasn’t been a year of unbridled for success for O’Brien, but the Topaz deal underscored his undimmed ability to spot a bargain, restructure and improve it, and flog it on for a hefty profit.

But, similar to the situation a year ago, Digicel, the engine room of O’Brien’s fortune, is likely to be the business that occupies most of his time in 2016.

Digicel has huge debts in US dollars, but the bulk of its revenue is in weaker regional currencies. As O’Brien predicted, the Fed has only just started raising interest rates, which should strengthen the dollar and means Digicel will now have to perform better simply to stand still on its debts.

It also now has a formidable regional competitor in the shape of CWC, which complicates O’Brien’s plan to switch seamlessly to fixed-line services, and Digicel could really do with some equity firepower to fight the war.

Will O’Brien try to float the business once again in 2016, as he has vowed to do? A second attempt at an initial public offering would be a risky move, unless he is prepared to drop his price or hand over control of a bigger stake.

Or might he cash in his chips to a rival, such as the Mexican billionaire Carlos Slim, the America Movil tycoon and the second-richest man on the planet?

It is shaping up to be another pivotal year ahead for O’Brien.