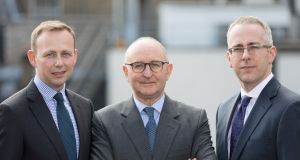 Specialist UK real estate investment manager PMM Group has opened an office in Dublin and plans to deploy more than €500 million in loans in Ireland and Britain over the next three years.

The non-bank lender told The Irish Times that its strategy will focus on “bridging the substantial liquidity gap left by Irish banks since the credit crisis, particularly for higher loan-to-value (LTV) ratios”.

About two-thirds of the €500 million is expected to be deployed in Ireland by the newly formed PMM Real Estate Finance, with some €100 million available this year.

The company has opened an office on Merrion Street in central Dublin, which will complement its base in London. It will provide senior and mezzanine finance for the acquisition and refinancing of commercial property.

PMM will offer two loan types here, with terms ranging from three to five years. Borrowers will be able to access loans of between €5 million and €25 million for property deals nationwide with an LTV of up to 80 per cent. The minimum interest rate will be 5.95 per cent.

It will also offer loans of between €10 million and €25 million, based on properties in “core cities” with an LTV of up to 75 per cent. The minimum interest rate is listed as 6.5 per cent.

All loans are non recourse with no personal guarantees involved.

PMM said it would offer a “personal and tailored” service, with efficient decision making and turnaround times. It claims to have a “healthy pipeline [of transactions] and is actively involved in a number of deals across the Ireland and the UK”.

Domhnall Gaffney, who will lead the Irish operation, and Gareth Williams have joined PMM as partners.

They have more than 30 years combined experience in the European commercial real estate loan market. Prior to joining PMM, they were part of the management team at LNR Partners Europe, a pan-European investment provider.

Commenting on its launch in Ireland, Mr Gaffney said: “PMM sees a great opportunity to offer liquidity to an underserviced part of the Irish market. We aim to underwrite real estate fundamentals rather than simply cash flows, which means loans can be structured to suit borrowers’ distinct business plans. We ...can bring something new to the Irish market at a time when debt finance from mainstream banks is scarce.

“The opportunity for non-bank lenders in Ireland is growing and access to finance remains challenging for domestic borrowers, especially for smaller loan amounts at higher LTVs. Rather than just price, certainty of deal execution and high levels of customer service are becoming an increasingly important consideration.”