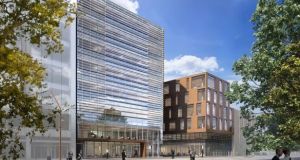 Hume House in Ballsbridge, Dublin 4. Blackstone is to sell on the building just over 12 months after buying the distressed asset from Nama.

Just as the US property boom was coming to an end in 2007, Jon Gray, the 46-year old head of real estate for Blackstone, spent $39bn to acquire Equity Office Properties, which owned the largest office portfolio in the US, from Chicago business magnate Sam Zell.

Worried about signals that the bubble was about to burst, Mr Gray and his team immediately began working to offload the EOP properties they deemed less attractive. “We spent one minute drinking champagne to celebrate,” he recalls. “And then we hit the phones.”

Within weeks, they had sold off more than half of what they had bought to some of the best-known players in the property business. Many of these buyers, including Harry Macklowe and Maguire Properties, went bust a short time later. In contrast, Mr Gray says he has already tripled his money on EOP.

When the dust had settled from the great US property bust, Blackstone’s real estate division found itself sitting firmly on top of the heap. For years after Mr Gray began working in Blackstone’s nascent property business in 1993, there was no single dominant player in the industry. Now Blackstone dwarfs every other firm. Goldman Sachs’ Whitehall Street property investment arm disappeared after losing most of its investors’ money in the crash, while Morgan Stanley’s real estate fund, MSREF, has shrunk dramatically after suffering big losses in the bust. Both were once comparable in size to Mr Gray’s unit.

Others, such as Vornado, an established New York real estate group, have been slow to recover. The likes of Mr Macklowe and Maguire imploded, in part because they overpaid when they bought from Blackstone in 2007.

Since the crash, Mr Gray’s unit has become the world’s biggest real estate investment manager. Blackstone owns more offices in the US and India than anyone else. It is also the largest residential landlord in the US, with a portfolio of 50,000 rental homes that it would like to take public by next year. Mr Gray is the man who sold the storied Waldorf Astoria hotel in New York to China’s Anbang Insurance.

When Mr Gray joined Blackstone in 1992 straight from college, the young firm had only $1bn under management; today it has about $335bn. He is responsible for the greatest part of that pile of money, entrusted to find profitable opportunities for the $100bn he has received from investors. Mr Gray’s business has made as much money as all of KKR, a rival in private equity, in the past three years. And he can boast of 17 per cent annualised net gains over 25 years, according to public filings from Blackstone.

This track record has made Mr Gray the likely successor to Mr Schwarzman, the 69-year-old who founded the private equity group in 1985. Like Mr Schwarzman, he is an astute investor. But otherwise the two are a study in contrasts. Mr Schwarzman seems to relish playing the part of the multibillionaire, while Mr Gray is far more low-key. He is seen as a nice guy in a business that is often not very nice. Many property magnates cultivate a larger than life image — think Donald Trump — but that is not Mr Gray’s style.

Blackstone and the other alternative investment groups have been among the biggest beneficiaries of the US Federal Reserve’s quantitative easing policies. Low borrowing costs, combined with depressed asset prices, were a godsend for these companies, whose lifeblood is debt. The Fed’s policies may not have led to a robust economy, but they were the major reason asset prices in financial markets — including property — recovered so quickly.

But Mr Gray’s success has also had to do with his penchant for making big, concentrated bets. That is what he and Ken Caplan, his chief investment officer, did when they bought Hilton Hotels in what was possibly the most profitable private equity deal ever.

Just two months after spending nearly $40bn on EOP in July 2007, Mr Gray took Hilton private in a $26bn transaction, writing the biggest cheque in Blackstone history in the process.

The timing was breathtaking, coming just as the end of the bubble approached. Two hedge funds from Bear Stearns had collapsed in June; a month later BNP would announce it could not value two mortgage securities investment funds because the market was imploding.

Hilton was listed but because investors considered it a sleepy company that was undermanaged, it traded at a discount to most other public hotel companies. At the time it caught Gray’s eye, it had only 450,000 rooms and was primarily a domestic hotelier, with a strong but underutilised family of brands.

Still, Mr Gray failed to anticipate the severity of the recession that followed the collapse in the US housing market and the implosion of Lehman Brothers in September 2008. Revenues per room dropped 20 per cent; profits dropped 40 per cent. At the height of the crisis, Blackstone valued its stake at only 30 cents on the dollar.

What saved Hilton was Mr Gray’s careful use of debt and a skilled management team. Private equity is all about using other people’s money, equity capital from investors and debt from the banks and capital markets. But Mr Gray has always been careful — if not paranoid — about how to structure his borrowings, which is one reason why he has flourished when many rivals have not survived. He eschews the short-term debt that comes with strings attached to give himself the flexibility to ride out the cycle, paying more to secure longer debt that has fewer conditions attached.

Mr Gray borrowed $20bn to finance the Hilton deal. As the hotel group’s prospects darkened and profits collapsed, the banks had to write down the value of their loans to Hilton. Mr Gray, believing his thesis remained intact despite the recession, decided to double down by spending $800m to buy $1.8bn worth of debt from nervous lenders, giving them some equity in the deal to make the sacrifice more palatable.

Room for a profit

Years after the crisis passed, in December 2013, Blackstone relisted Hilton. Today, it has made more than $10bn in what is probably the single most profitable private equity deal ever, surpassing Apollo’s deal for the LyondellBasell chemical company. Since Blackstone still has a stake in the hotel group, its final proceeds are not yet known.

Those profits include the sale of the Waldorf Astoria hotel — part of the Hilton portfolio — to Anbang Insurance, for $1.95bn. Wu Xiaohui, the Anbang chairman who remains something of a mystery in US business circles, is friendly with Mr Gray; the two often share a meal whenever the Chinese entrepreneur is in New York.

In mid-March, Mr Wu spent $6.5bn to acquire Strategic Hotels & Resorts from Blackstone, a mere three months after Mr Gray’s group purchased it for around $6bn. Mr Wu last week pulled out of a bid for control of Starwood, a chain which includes the Westin and Sheraton brands, after a closely watched bidding war with Marriott.

Hilton now has more than 750,000 rooms, with much of the growth coming from Asia, under its chief executive Chris Nassetta, the former head of the Host Marriott hotel chain, whom Mr Gray hired.

Mr Gray has also created businesses from scratch. He and Chris Heady, his head of Asia, hired Tuhin Parikh to invest in India in 2006. For almost five years, Mr Parikh waited for an opportune time to pounce. As the markets fell out of love with India and it became impossible for local developers to raise capital in 2011, Mr Parikh began to buy aggressively, and has since invested a total of $1.2bn.

Some of his purchases came from developers who were forced to sell, either because of regulatory pressure or as a way to raise badly needed cash. Acquisitions included a partially completed Goldman Sachs project in Bangalore. Today Blackstone is the largest owner of office parks in the country, often bought at bargain prices, with a market value of $4.2bn.

Part of Mr Gray’s success has to do with his down-to-earth style that contrasts sharply with the man many expect him to replace one day.

Mr Schwarzman is a very visible presence on the social and philanthropic scene. He sits on the board of the New York Public Library after donating $100m. His photo appears regularly on the society pages as he attends functions at the Frick Collection in Manhattan, where he is a trustee, or the John F Kennedy Center for the Performing Arts in Washington, where he is chairman emeritus.

Mr Gray is hardly a fixture in that world. But as the second-largest shareholder in Blackstone after his boss, with a net worth estimated at more than $1bn, he is giving a growing portion of his wealth away, particularly to cancer research at the University of Pennsylvania and to educational causes such as the Harlem Village Academies, where he serves as chairman.

He will have to come to terms with his growing responsibility as the face of Blackstone when it comes to meeting shareholders and speaking at conferences, knowing that he will not always be simply known as a real estate guy. At the same time though, he continues to do deals, even as the sort of acquisitions he makes evolves.

One of his latest deals illustrates the changes affecting the market. Late last year Mr Gray and his team bought Stuyvesant Town, a postwar residential complex in Manhattan for $5.3bn, once again profiting from the miscalculations of others.

Just before the global financial crisis, Stuyvesant Town was purchased by Tishman Speyer and BlackRock for $6.3bn. But they borrowed too much — $4.4bn — and could not repay. After years of uncertainty and bitter fighting between subsequent owners and tenants, Mr Gray worked out a deal with residents, garnered tax concessions from the city and purchased the property for $1bn less than its previous owners paid a decade earlier.

Lately, the deals have been coming to him. That is why when General Electric sold its $23bn real estate portfolio, he was the only one to get a call.

If he is on the way to being a Master of the Universe, it still does not show.

“I recognise the fragility of success, the Icarus thing,” he says. “I don’t want my tombstone to just say he had really good internal rates of return”.

1 FinCEN Files: Dublin business features in leak of US treasury documents
2 Chris Johns: We’re in for a triple whammy of Covid, Brexit and the US elections
3 Aldi empire wracked by family feud
4 A look at Elon Musk’s track record ahead of Tesla’s ‘battery day’
5 Facebook may pull social media platforms from Europe
6 How to . . . move (almost) everything to your new phone
7 Career path blocked by Covid? Time to take a new direction
8 Mark Paul: Government faces dilemma on which businesses to save
9 Over 2,000 offshore firms set up from home in Ranelagh, Dublin
10 NatWest considers closing Ulster Bank in the Republic
Real news has value SUBSCRIBE