Louis Murray tells High Court he had not sought to deceive AIB, who he owed €19.8m 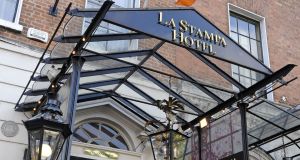 The La Stampa hotel on Dawson Street, Dublin. Before resuming his evidence on Friday, former owner Louis Murray confirmed an apology made by his lawyer to the court on his behalf over calling the receiver ‘a thug’. Photograph: Dave Meehan

Former La Stampa restaurant owner Louis Murray has told the High Court he had not sought to deceive a bank to whom he owed €19.8 million by not telling it he had a “stunning penthouse apartment” in Marbella, Spain.

Mr Murray said the apartment was worth €1.5 million but he was forced to sell it at less than half that sum after his income was stopped, following his company going into receivership, in order to pay for basic necessities.

He was continuing to be cross-examined in his case against AIB and receiver Declan McDonald alleging breach of an agreement to settle his debt through the “consensual sale” of his restaurant, bar and hotel business in Dawson Street, Dublin.

Before resuming his evidence on Friday, Mr Murray confirmed an apology made by his lawyer to the court on his behalf on Thursday over calling the receiver “a thug”, among other things.

He told Lyndon MacCann SC, for the bank and receiver, that before the receivership led to the freezing of his deposit account, he had a €150,000 loan from his company, Balieboro Springwater, in receivership, from which he paid himself €75,000 and €75,000 to his partner, Cristina Petrar.

When his funds were stopped, he said he went to the ATM “and there was nothing”.

His electricity was cut off and he was having implant treatment for cancer in the Blackrock Clinic, which he was unable to pay for, he said.

Mr Murray said he immediately went to Spain where he sold the Marbella apartment. He said that was his family’s second home, bought for cash in 1996, and it was sold for what was effectively €1 million less than its valuation after taxes were taken into account.

Asked by Mr MacCann why he did not tell the bank in October 2014, when it sought details of his assets and liabilities, about that “trophy apartment”, Mr Murray said he did not feel it was his and considered it a family asset.

He had made arrangements to put the apartment into a trust for his children but had not executed those arrangements due to his illness, he said.

Mr Murray also said he had two apartments in Romania. He had originally bought four apartments there but had given two of them to Ms Petrar.

His other other assets were his “wonderful” home in Killiney, Dublin, and an adjoining 4.5 acre site which, with planning permission, is currently worth up to €8.5 million, he said.

His relationship manager in AIB offered him a loan based on that equity of €1 million “at an extraordinary interest rate” of just 0.05 per cent, he said.

He agreed, although he had said Ms Petrar was 50 per cent owner of his assets, the title to the properties was in his name. Asked why he had included in his assets his Killiney home, which he also planned to leave in a trust for his children, but not the Marbella apartment, he said the simple answer was he didn’t know but there was “no intentional deceit”.

Mr MacCann put it to him that he was deceiving AIB in 2014 with a view to buying time when he told the bank his entire asset value was just €1 million, based on the then outstanding equity in his home.

Mr Murray said he had “never deceived anyone” in his life and while it might be reasonable to suggest it from the bank’s perspective, that was not his intention. The case resumes before Mr Justice David Barniville on Tuesday.

1 What is Covid Tracker Ireland? The HSE’s new app explained
2 British holiday home rental company exits Irish market
3 Ireland’s economy forecast to shrink 8.5% due to Covid-19 pandemic
4 Will family’s tax debt stop me getting my inheritance?
5 TikTok to quit Hong Kong mobile market ‘within days’
6 Why gift a son now if it eats into his tax-free inheritance threshold?
7 How to save money while helping to save the planet
8 Poverty could afflict more than one-in-five children in State by year end
9 Central Bank governor to call for ‘credible’ path’ to cut State debt post-Covid-19
10 State-owned DAA may have to contribute to bailing out Dusseldorf airport
Real news has value SUBSCRIBE