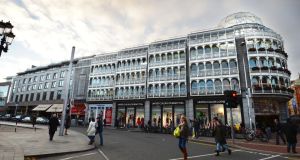 Dublin’s St Stephen’s Green shopping centre is about to undergo a major shake-up with plans to change the layout to accommodate up to five large new stores aimed at international fashion traders. Ten cinemas with a seating capacity of 1,860 are also to be developed later this year on the roof of the centre and shops on the second floor are to be remodelled to accommodate a range of restaurants and coffee outlets.

The long overdue reorganisation is designed to broaden the appeal of the centre in the run up to the 25th anniversary of its opening later this year. Irish Life hold a 73 per cent stake in the centre while the remaining 27 per cent is owned by leading businessman Pierce Molony.

While the centre has a good mix of traders its main weakness has been a failure to attract cutting-edge fashion retailers because it does not have sufficiently large shops. The problems have also been compounded by an over reliance on kiosks – 20 in all and some on the large side – which has added to the cluttered appearance of the centre.

The new ground floor layout will include a central pedestrian isle instead of the two existing walkways and the amalgamation and enlargement of many of the shops to give traders floor areas of 300-400sq m (3,300-4,305sq ft). Around five or six of the kiosks, including some of the bigger ones, are to be removed to make way for the larger shops.

Mr Molony said that with so many small shops on Grafton Street, fashion retailers could not find sufficiently large premises to suit their operations. For that reason, the St Stephen’s Green centre planned to reduce the number of its outlets by 25 per cent and to amalgamate and extend some of them to cater for retailers requiring large floorplates.

The reconfiguration is also expected to be of considerable benefit to a range of shops on the first floor where TK Maxx is the biggest crowd puller.

While TK Maxx pays a rent of around €600,000 for 2,322sq m (25,000sq ft), new traders looking for one of the large scale shops on the ground floor will invariably opt for a base rent plus a percentage of turnover. This formula has now become a standard arrangement for many new traders.

The decision to develop 10 cinemas on the centre’s roof will greatly enhance the appeal of the centre and the general Grafton Street area .

Mr Molony said that after recently receiving full planning approval for the €10 million project from An Bord Pleanála they now planned to seek quotations for building the cinemas. They would also be looking for an operator for the cinema complex, the only one in the south inner city which would have the advantage of a Luas stop outside the front door of the centre.

The St Stephen’s Green centre also has the benefit of its own 1,200-space car park next to the planned cinemas. The spacious Cineworld on Parnell Street is currently the main venue for cinemagoers in the city centre.

Stephen Murray of Jones Lang LaSalle is advising the centre on future lettings. Last year Irish Life and Permanent sought a buyer for a 20 per cent stake in the shopping centre. The shareholding was owned by a unit linked fund and managed by Irish Life. Although Jones Lang secured over the asking price of €20 million, the shareholding was withdrawn from the market. The centre is believed to have a rent roll of around €10 million per annum.