Son of bankrupt businessman wants to raise €210,000 on Dublin home 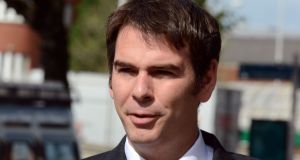 The son of bankrupt businessman Sean Quinn has asked the Commercial Court to vary freezing orders on his assets to allow him and his wife, who is expecting their first child, raise a €210,000 charge on their Dublin home so those funds will be available next month when he is due to purge his contempt of court orders.

His sister Ciara and her husband also want variations to allow them make some €10,000 in tax payments, including the local property tax.

Various members of the family also want the court to exclude certain bank accounts, some shareholdings and their existing motor vehicles or any replacement vehicles, from terms of the freezing orders, obtained by Irish Bank Resolution Corporation from June 2012, which restrain them reducing their assets below €50 million.

The variations are required to allow the family set up direct debits and standing orders, meet tax payments, manage shareholdings in the cases of two of them and, when appropriate and if necessary, sell cars, Aoife Quinn said in an affidavit.

Ms Quinn said it was necessary to seek the variations now because it was expected it would be some time before the full heraing of the proceedings against them, in which IBRC alleges a consiracy to strip multi-million assets from companies in the family’s international property group, will open.

The full hearing has been deferred pending the hearing of criminal proceedings against former executives of Anglo Irish Bank.

Sean Quinn’s wife Karen Woods is seeking a variation to allow her deal, if necessary, with shares valued at €102,500 but was not seeking to put any proceds from sale of the shares beyond the control of receivers, Aoife Quinn said. Ciara Quinn wanted to deal with a Ryanair shareholding on the same terms.

In her affidavit, Aoife Quinn said her brother and sister Brenda, unlike the other family members, have no bank accounts not controlled by the receivers and wanted to be permitted operate such accounts. Her brother and his wife were expecting their first baby next year and would need discharge expenses for that, plus tax payments of some €10,000, she said.

Brenda Quinn wants to be permitted put an unidentified sum due to her from her former employers, Quinn Insurance, as compensation for loss of her employment into a Bank of Ireland account in Cavan and have that excluded from the freezing orders and control of the receivers, subject to statements concerning the accoutn being made available to the receivers. That sum is not related to the issues in this case, Aoife Quinn said.

IBRC, which obtained the freezing orders from June 2012, said it wanted a short time to take instructions on Sean Quinn Jnr’s proposal concerning the €210,000 mortgage and on an application by his sister Ciara and her husband Niall McPartland for variation orders allowing them make income and residential property tax payments of some €10,000, plus a 5 per cent surcharge if necessary.

Barry O’Donnell, for IBRC, indicated the bank did not want to obstruct those particular applications but had concerns about other proposed variations and wanted time to put those concerns on affidavit.

Mr Justice Kelly said he would deal with the applications of Sean Quinn Jnr concerning the €210,000 mortgage, and of Ciara Quinn and Mr McPartland concerning the tax payments, on Friday as they appeared more urgent and he adjourned the other matters to December 16th.

Earlier, Martin Hayden SC, for the Quinns, said his solicitors wrote to IBRC’s solicitors on November 7th seeking consent to the proposal to create the €210,00 mortgage but received no reply. The mortgage issue and tax payments were urgent and Mr Quinn was due before the High Court on December 4th in the contempt proceedings and wished to have the €210,000 funds availabe then.

In seeking to vary the freezing orders, Ciara Quinn and Niall McPartland want five accounts set up by them for their children excluded from the court orders, subject to statements of the accounts being provided to the receivers.

Colette Quinn also wants an account in Ballyconnell, where she has moved to from Lisnaskea, excluded, as her Lisnaskea account had been, from the court orders, subject to providing statements to the receivers.