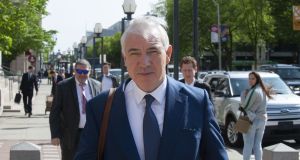 It is claimed that Sean Dunne is not complying with an order to pay €7,000 monthly to increase the assets available for his creditors.

Proceedings against businessman Sean Dunne over an alleged contempt of court order will be heard in the High Court in November.

Official Assignee (OA) Chris Lehane claims Mr Dunne is not complying with an order to pay €7,000 monthly to increase the assets available for his creditors. That order by Ms Justice Caroline Costello directed that Mr Dunne make payments of €7,000 monthly from September 25th 2018, ending on May 25th 2021.

As a result of Mr Dunne’s alleged failure to comply, Mr Lehane has brought a motion seeking to have Mr Dunne brought before the court to answer his alleged contempt.

Ms Justice Pilkington set November 13th. When she asked if there was an objection to Friday the 13th as some people had an aversion to that date, counsel said the date was acceptable.

The court had previously been told it was anticipated Mr Dunne would oppose the OA’s application for the monthly payment orders on grounds he was unable to pay the €7000 per month payments.

The application is the latest in a long running battle between Mr Dunne and bankruptcy officials in both Ireland and the United States.

Mr Dunne was adjudicated bankrupt here in 2013 on foot of an application by Ulster Bank after he had defaulted on €164 million in loans. That same year, Mr Dunne filed for bankruptcy in Connecticut in the United States when he claimed to have debts of $1 billion (€890 milion) and assets of $55 million and a US bankruptcy trustee was appointed by a US court.

Mr Dunne was due to exit his Irish bankruptcy in 2016 but it was extended by 12 years in 2013 after the High Court found he had not co-operated with the OA.