Property developer Sean Dunne has begun testifying in a US court in Connecticut as his American bankruptcy official attempts to reverse the transfer of tens of millions of euro in assets to his wife Gayle Killilea. 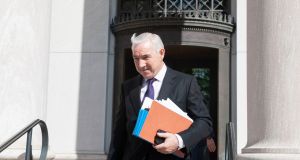 Sean Dunne at the US federal courthouse in New Haven, Connecticut: testified he considered Paul Gallagher and Charlie McCreevy to be personal friends. Photograph: Douglas Healey

The court also heard that Mr Dunne said in a handwritten will in 2007 that he wanted former minister for finance Charlie McCreevy and former attorney general Paul Gallagher to run his companies in the event of his death.

Mr Dunne testified that he considered Mr Gallagher and Mr McCreevy to be personal friends.

Mr Dunne took the stand at the trial late on Wednesday and on Thursday, when the court heard of an email sent by the developer on March 2nd, 2010, to Mr Ahern in relation to the Lagoon Beach resort in South Africa.

The plaintiffs entered the email to Mr Ahern into evidence over the objection of Gayle Killilea’s lawyer on Wednesday during her cross-examination. The email discussed the value of the Lagoon Beach property and said China could be a key player in finding a buyer.

It noted that Mr Ahern was to be in London at the same time as then-South African president Jacob Zuma and asked if there was “any prospect” of Mr Ahern speaking to Mr Zuma about a possible sale.

The plaintiffs introduced the email in an effort to undermine statements from Mr Dunne’s wife – Ms Killilea – that the resort was struggling and had diminished value when Mr Dunne gave it to her in 2008.

Mr Dunne testified that tens of millions of euro in gifts to Ms Killilea were intended to provide for her independence and for their children, not to shield assets from creditors as his business empire was collapsing.

The developer’s testimony echoed that of Ms Killilea, who immediately preceded him on the witness stand. She returned to her home in the UK after spending more than three days testifying, saying she planned to return next week.

Mr Dunne and Ms Killilea both told the jury that a handwritten, unwitnessed agreement the couple wrote out during a March 2005 Thailand holiday governed the €68 million in property, cash and other assets he gave her between 2005 until 2008. That document stated that Mr Dunne committed to make the gifts to Ms Killilea, whom he married less than a year before, to give her independence and to provide for their children.

Mr Dunne estimated that the gifts, originally intended to be profits from sale of various properties, but subject to change under the agreement, constituted about 20 per cent of his total wealth at the time.

Mr Dunne testified that the couple had looked into a prenuptial agreement before their 2004 marriage, but were advised that Irish law would not recognise it. The impetus for the agreement was the death of Ms Killilea’s best friend in Thailand in the December 2004 tsunami, Mr Dunne told jurors. Her death shook Ms Killilea, Mr Dunne said.

Asked why he never had the document and later handwritten documents relating to it formalised, Mr Dunne responded that the couple faced relentless scrutiny from the media and feared the documents would leak to the press.

Mr Dunne also laid out the purchase of Walford on Shrewsbury Road, Dublin 4 for nearly €58 million not long after the couple concluded the agreement, testifying that he bought it for her. As with the couple’s agreement for him to turn over a significant portion of his wealth to her, Mr Dunne attributed secrecy surrounding their ownership to their wish to avoid publicity. The couple used the code word “Queenstown” to refer to the home in documents and correspondence with professionals, he testified.

The couple never lived in the house, the most expensive in Ireland, deciding instead to move to Switzerland, once again to escape media scrutiny, Mr Dunne testified. He gave the same reason for their later move to the United States.

Mr Dunne is being sued by the trustee of his American bankruptcy, filed during the couple’s sojourn in the United States, to claw back the tens of millions of euros in assets he gave his wife and distribute them to his creditors. The trustee is trying to prove that the asset transfers were a ruse to deprive creditors, an allegation the couple denies.

10 Nintendo readies new Switch as it battles next gen consoles