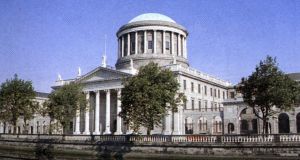 The case by Spencer Place Development Company, of which Mr Ronan is a director, concerned the company’s plan for more than 500 apartments/co-living spaces and commercial units in the North Lotts/Grand Canal strategic development zone (SDZ) of the north Dublin docklands.

The company sought to be allowed a building height of between seven and 13 storeys in accordance with general building height guidelines. The SDZ planning scheme for the lands permits heights of up to only 10 storeys, according to the council.

In High Court proceedings, the company challenged the council’s legal interpretation of the December 2018 Urban Development and Building Heights guidelines issued by the Minister for Housing. It claimed the council was incorrect in law and acted outside its powers.

The council disputed those claims and said the company’s challenge was premature, given it had not even decided on the planning applications.

In his judgment of May 2019, Mr Justice Garrett Simons agreed the challenge was premature but went on to consider the company’s arguments before dismissing them in their entirety.

The judge held the December 2018 height guidelines do not apply to the SDZ planning scheme for North Lotts/Grand Canal.

The most they require is for the local authority to review and amend that scheme and it must be carried out in accordance with prescribed procedure, he held. In particular, he said, it may be necessary to undertake an environmental assessment of any such amendments.

The company appealed and the three-judge Court of Appeal dismissed its appeal on Friday. The court, in a judgment delivered by Ms Justice Caroline Costello, agreed with the High Court the company’s case was premature.

These proceedings were instituted before any decision on the company’s applications for planning permission, she said.

The judge noted the council had argued the case had become moot or pointless because the company had not appealed the council’s May 2019 decision refusing its applications for planning permission for the development. She said she was not considering that point because it was not necessary to resolve the appeal.

In a separate judgment addressing the substantive arguments of the company, Mr Justice Maurice Collins dismissed all those arguments.

He said the December 2018 guidelines contained a number of specific planning policy requirements (SPPRs) which planning authorities must comply with.

The substantive issue in this appeal was whether, in considering the company’s North Lotts/Grand Canal planning applications, the council was bound to apply the SPPR3A provision.

The developer had argued the council was so bound but the council argued SPPR3A has no application to existing planning schemes and has effect only on the review of such schemes and the adoption of an amended scheme. The council’s position is correct, the judge ruled.

That meant the height limits in the scheme continued to apply and the planning applications by the developer could not be granted.