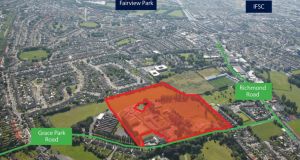 The Rosminian Order of priests and brothers is to sell its freehold interest in eight period buildings and outright ownership in 10 acres of development land at St Joseph’s campus on Grace Park Road in Drumcondra, Dublin 9.

Estate agents Savills are to invite offers in excess of €9.5 million for the complex which extends to 6.88 hectares (17 acres) and is located directly opposite All Hallows College.

The Rosminians were among 18 religious orders investigated by the Ryan commission looking at child sex abuse in industrial schools.

The order ran industrial schools at Ferryhouse in Clonmel and Upton in Cork and was one of 18 groups asked to pay €128 million to the State under the 2002 indemnity agreement.

The various orders contributed €39 million in cash as well as some properties, but after the publication of the Ryan report, they were asked to make further substantial contributions.

A spokesman for the Rosminians had “no comment” when asked if the order would be using the proceeds of the sale of the Drumcondra buildings and land to make additional payments to the Government, which has spent €1.46 million to date on the redress scheme.

The order plans to rent the extensive buildings on site on a 25-year basis to allow it to continue to operate ChildVision, Ireland’s only education centre for blind and visually impaired children.

The order is to pay an annual rent of €150,000 for the continuing use of the buildings, notably Drumcondra Castle which dates from 1560, and was altered and extended in both the 18th and 19th centuries.

The castle is now recognised as a classical house.

The campus also includes walled gardens dating from the 18th and 19th centuries, which are now used by the students for a variety of purposes including a pet therapy area.

The lands to the south and west of the campus are open grounds that are not actively used.

The entrance gates, piers, ironwork and lodge at the entrance to St Joseph’s campus are all listed for preservation, just like the historic buildings on site.

Developers will be particularly interested in the 10 acres of undeveloped land which has been the subject of planning permission in recent years.

There is currently a 10-year planning consent for a residential, education and institutional development on a slightly larger land holding.

The permission was granted by Dublin City Council in January 2010 and subsequently endorsed by An Bord Pleanála.

The residential element of the scheme provides for the building of 295 homes consisting of 44 houses, 12 duplex units and 239 apartments. A new owner may well opt for a variation of the planning permission to allow for more houses and fewer apartments.

The original plan also provided for a public park extending to 1.11 hectares (2.7 acres).

Jill Horan of Savills described the campus as a “unique property” that would appeal to both developers and speculators, who would have a truly superb canvass from which to work.

The lands had huge development potential in light of the existing planning permission, which also offered an exceptional precedent for any future planning applications.