IBRC claims Quinns trying to get around setback in court ruling 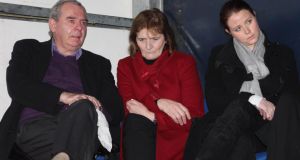 Bankrupt businessman Sean Quinn, his wife Patricia and daughter Aoife. The family of Mr Quinn say they are “innocent parties” to €2.34 billion loan transactions involving Quinn group companies and therefore should be allowed amend their claim for their pending action denying liability for those loans. Photograph: Niall Carson/PA Wire

THE family of businessman Sean Quinn say they are “innocent parties” to €2.34 billion loan transactions involving Quinn group companies and therefore should be allowed amend their claim for their pending action denying liability for those loans.

The family want to amend their claim in light of a recent Supreme Court decision on a key preliminuary issue in their case.

The case by Mr Quinn’s wife Patricia and five adult children is against Irish Bank Resolution Corporation, and its liquidator Kieran Wallace and centres on the family’s claim they are entitled to deny liability in relation to their guarantees and security for the loans because of statutory and regulatory breaches by IBRC’s predecessor, Anglo Irish Bank.

The case, expected to last a number of months, is scheduled to begin in June.

Last March, in a ruling on a key preliminary issue, the Supreme Court ruled in favour of IBRC’s claim that the Quinn guarantees were not invalidated by any illegality over the loans. Even where there is illegality, the contracts the Quinns entered into were nonetheless enforceable, the court also ruled.

Arising out of that decision, the Quinns applied to the High Court to amend their original statement of claim for next month’s full hearing. IBRC and Mr Wallace oppose the application.

Martin Hayden SC, for the Quinns, said his clients were strangers to the alleged illegal conduct which the Supreme Court had found the family could not rely on.

In an affidavit on behalf of the family, Aoife Quinn said the Supreme Court did not rule as to whether innocent people could rely on illegality.

Both parties to the loan transactions (Anglo and Quinn companies) were culpable in relation to breaches of the 2005 EU Market Abuse Regulations and Section 60 of the Companies Act 1963 making it unlawful for a company to assist people to buy shares in that firm, she said.

The Supreme Court found that securities which were collateral to impugned underlying share charges and pledges in this case may nevertheless be unenforceable “as against innocent parties” and in circumstances where those securities were entered into in breach of the market abuse rules and company law, she said.

Mr Justice Frank Clarke stated in the Supreme Court judgment a question potentially arises whether a party to a transaction which is not illegal, and merely collateral to illegal activity, is “necessarily bound” by the consequences of such a collateral contract.

That question comes into greater focus where the parties concerned have not benefited in any way from the overall transaction, he said. There may well be strong justification, for public policy, treating such cases differently, Mr Justice Clarke said.

Paul Gallagher SC, for IBRC, said the Quinn arguments had already been made in the High and Supreme Court as part of the preliminary issue and this was now an attempt to “get round” the result of the Supreme Court decision.

The Quinns were seeking to subvert the whole basis on which the preliminary issue was tried, he said.

They were looking for “a second bite at the cherry” and their application to amend the statement of claim “does not even get to first base”, he said.