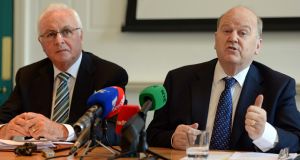 The Department of Finance raised concerns about a lack of expertise in the office of the Comptroller and Auditor General (C&AG) Séamus McCarthy and how that could have impacted its recent report on Nama’s Project Eagle sale.

The C&AG published a report this week saying Nama could have lost the State up to €220 million on the sale of Project Eagle to US company Cerberus – which realised £1.3 billion in April 2014.

In its response, Nama claimed the C&AG did not have the expertise required to value loans secured on properties – which was what it actually sold – and that, despite the C&AG seeking to recruit people with that knowledge, it ultimately did not do so.

In a letter to Minister for Finance Michael Noonan, Nama chairman Frank Daly said he understands, in June, department officials expressed surprise to the agency at the C&AG staff’s lack of knowledge of the loan sales market and that they would benefit from advice in this area.

When the C&AG began its investigation last year, it advertised for expertise in loan sales valuations, but did not hire any individuals or firms with this knowledge before completing its report.

The office said yesterday the C&AG is obliged to report to the Dáil’s Public Accounts Committee.

“Out of respect for the committee and its public accountability function, he doesn’t comment publicly on matters in relation to his reports until they have been disposed of by the committee,” it said.

Mr McCarthy’s report bases its finding that the deal left the State with a probable £190 million loss on the difference between Nama’s own calculation that the loans were worth £1.49 billion, at the end of 2013, and the £1.3 billion for which it sold them.

Nama rejects this and says it got the best deal possible for the taxpayer.