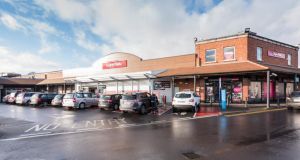 The SuperValu in Bray, Co Wicklow: Tthe store, owned by Friends First for the past decade, has been bought by the Musgrave Group for more than €9m. 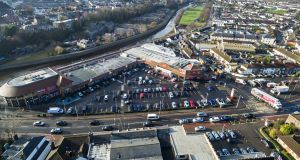 Food retailer and wholesaler Musgrave has outbid a number of Irish and European funds to buy the Bray, Co Wicklow, store rented by its subsidiary company SuperValu.

The new owner has paid in excess of €9 million for the store, which will show a net initial yield of 6.9 per cent.

Savills had been guiding €8.4 million for the investment, which had been owned for the past 10 years by Friends First.

This allied with increasing investor confidence in the retail sector ensured there was strong interest in the property, both domestic and foreign, leading to competitive bidding and a sales price well above the guide.

SuperValu is one of Ireland’s largest grocery and food chains, with a 22.6 per cent share of the Irish grocery market.

The Bray store traded as Superquinn until 2014, three years after the Musgrave Group bought it and the entire chain of Superquinn businesses out of receivership.

In 2007, Friends First acquired the Bray store for its First Corinthian Irish Retail Fund in a sale and leaseback deal.

Claire Solon of Friends First said the strong interest in the property highlighted the demand for good quality retail investments and the solid performance of this sector of the market.

Over the past year, Friends First has been heavily involved in upgrading the Royal Hibernian Way on Dawson Street and Blackrock Shopping Centre in south Dublin.

The fund is also involved in the conversion and letting of a number of top-class buildings in the South William Street area of the south inner city.

1 Ryanair and Aer Lingus monitor impact of conronavirus on travel to Italy
2 Bank leaked my loan request to family who tried to rip me off
3 Boris Johnson's new immigration regime will damage much more than industry
4 Mastercard to create 1,200 new jobs by expanding base in Dublin
5 Nineteen staff made redundant by Nama share €1m
6 Nothing beats practice in bid to master public speaking
7 Garda mobile contract win causes concern over Eir’s use of Huawei kit
8 Varadkar resigns amid warning impasse will hit the economy
9 Barclays scraps system monitoring how long staff spent at desks
10 High time: Netherlands moves to clean up absurd cannabis policy
Real news has value SUBSCRIBE