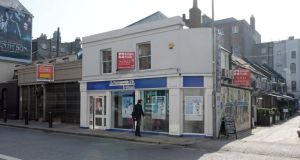 Investors have bought the Unicorn Restaurant and a piano bar to its rear, and two retail premises nearby fronting Merrion Row. Photograph: Eric Luke / The Irish Times

A business consortium is planning to develop a mixture of shops, restaurants and apartments on a key Dublin city centre site which will include the troubled Unicorn Restaurant at Merrion Row.

The group of investors led by Ray Cotter has spent in excess of €5 million on assembling the high profile site which is expected to accommodate up to 2,787sq m (30,000sq ft) of retail and restaurant facilities as well as around 15 apartments. The area is noted for its vibrant street life and its lively business and entertainment facilities.

The group paid in the region of €3.5 million for the Unicorn Restaurant and the adjoining retail premises fronting on to Merrion Row which is rented by the UK-based Nationwide Building Society.

Separately, the piano bar at the rear of the Unicorn was acquired for close to €500,000 and to complete the site assembly, the consortium bought in the spacious Unicorn coffee shop next to the Nationwide from Dublin City Council for an undisclosed sum.

The new owners are expected to seek planning approval for a four or five-storey development to replace the existing permission which provides for a five-storey building with the upper floors cantilevered to overhang above the outside dining area on Merrion Court.

Spacious apartments at this location could be expected to fetch anything from €750,0000 to €1 million in a strong market.

The Unicorn and the Nationwide building were among five properties held by Jeffrey Stokes and his wife Pia Bang Stokes which were offered for sale through Knight Frank on the instructions of receiver Tom Kavanagh of Deloitte.

The High Court was told last July that Dunbar Assets Ireland, formerly Zurich Bank, was pursuing the couple and their two sons, Simon and Christian Stokes, for some €14.7 million arising from various loans and guarantees.

The Unicorn has for many years been extremely popular with politicians, property developers and business people.

It is being run by the couple’s trading company Petrola under a four years and nine months lease from June, 2013.

The 120-seater restaurant and four overhead apartments are currently producing a combined rental income of €244,000.

The Stokes portfolio also included a well presented Georgian office building at the rear of the Unicorn at 16 Hume Street which is let to Holmes O’Malley Solicitors on a four years and nine months lease at a rent of €40,000 a year. The investment was sold to a private investor by Knight Frank at over €900,000.

The same agency is shortly to offer for sale a shop at 5 Westmoreland Street owned by the Stokes and let to Claddagh Records at a contracted rent of €40,000 per annum.

The lease includes a mutual break option in May, 2016, but otherwise the tenant has another 19 years to run on the lease. The shop has 110sq m (1,184sq ft) of floor space on three levels.

1 European Commission to appeal Apple tax ruling on Friday
2 Period of ‘extreme stress’ beckons for Irish businesses
3 Ireland is in danger of losing the woods for the trees on emissions reduction
4 Irish company to test vaccines on volunteers deliberately infected with Covid-19
5 Dunnes Stores set to enter grocery delivery market
6 The wealth of the Irish – how do your assets match up?
7 FinCEN Files: Dublin-listed fund sent $23m to firm suspected of links to Russian crime boss
8 Extreme stress warning, French resolve and woods for the trees
9 Is now the right time to reduce our working hours?
10 FinCEN Files: Scale of challenge facing financial regulators revealed in leaked documents
Real news has value SUBSCRIBE