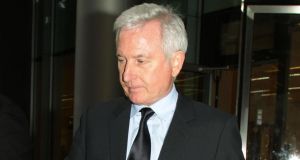 Property investor Patrick McKillen will have to pay nearly €10 million to cover the legal costs of the billionaire Barclay brothers in his failed British high court bid to win control of three luxury London hotels.

However, it does not cover subsequent court of appeal challenges, or the costs incurred by other parties sued by Mr McKillen, including financierDerek Quinlan.

In all, including his own extensive legal bills, the Belfast- born businessman – who is now suing the Barclays in the Irish High Court – could face a bill for €25 million for the London case alone.

Solicitors for the Barclays had claimed over €11 million for costs of the long-running, often bitter high court battle.

The figure, signed off before taxing master Leonard in the royal courts of justice, is near the top end of expectations, legal sources said yesterday.

Mr McKillen eventually lost his argument that he should have been allowed to buy part of Mr Quinlan’s crucial stakeholding in the hotels.

Instead, the Barclays, who directly own 28 per cent of the hotels, reached an agreement with Mr Quinlan whereby they won control, but not ownership, of Mr Quinlan’s shares.

Mr McKillen has already paid €3.12 million on account for the Barclays’ bill, but the remainder must be paid within 14 days.