McGowans of Churchtown to be redeveloped for retail

Plans for the site include a medical centre, pharmacy, restaurant, café and shop 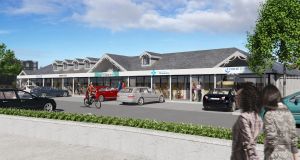 The former McGowans pub in Churchtown – sold for €16 million in 2007 – is to be redeveloped into five retail units after lying idle for a number of years.

Plans for the site include the development of a medical centre, pharmacy, restaurant, café and shop. The medical centre and pharmacy are already reserved and the other three units are available to lease through Mervyn Ellis of BNP Paribas Retail Estate.

The forWork has begun on the redevelopment and it is expected to be complete by May 2017mer McGowans pub, which also traded as the Braemer Rooms, is opposite SuperValu on the Braemer Road. Nearby retailers include Meadows and Byrne, Lloyds Pharmacy and Howards Way.

McGowans was acquired in 2007 by Select Retail Holdings (SRH) which had bought Superquinn in 2005 for €450 million. SRH was a consortium comprising investors Bernard McNamara and Jerry O’Reilly, as well as businessmen David Courtney, Bernard Doyle and Terry Sweeney.

Musgraves then acquired the property when it acquired Superquinn but sold the pub in 2014 to MM Capital who are now undertaking its redevelopment.