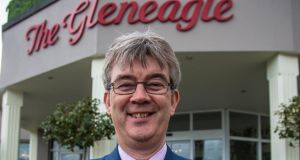 Gleneagle director Patrick O’Donoghue said the commercial terms now being offered by Cork council were very different to those offered six years ago.

A legal row has erupted over the awarding of a contract to build an event centre in Cork at an estimated cost of €85 million.

It is the latest obstacle affecting delivery of the 6,000-capacity entertainment venue, which had its sod turned before the 2016 general election but has yet to see a brick laid.

In Commercial Court proceedings, the owner of the Irish National Event Centre in Killarney, Co Kerry has brought proceedings over the decision of Cork City Council to award the contract to BAM Contractors Ltd.

Mr Justice David Barniville agreed on Monday to admit the case to the fast-track Commercial Court.

Gleneagle Hotel (Killarney) Ltd, with offices at Mill Road, Killarney, which owns and operates the Irish National Event Centre in Killarney, wants orders setting aside or permanently suspending the council decision in a January 3rd 2020 notice to award the contract to BAM. It is claimed the council’s decision was unlawful and should be suspended and, if necessary, an order should be made directing the council to re-advertise the contract.

The council denies the claims.

In a statement grounding its application, Gleneagle Hotel Ltd said the council had been considering construction of an event centre in Cork city for a number of years and knew, or ought to have known, that would compete with the Gleneagle centre in Killarney. It claims it is likely to incur damage from operation of a rival event centre subsidised out of public funds.

It claims the 2020 notice reveals the council has allegedly radically changed the parameters of the competition compared with those advertised in 2014.

In the 2014 notice, the council proposed to part-fund the project with the expected value of the works between €25 million and €40 million and public funds in the region of €14 million, it claims.

In contrast, the 2020 notice states the public funds would cover €50 million of the project cost and the preferred bidders would supply a further €35 million, which would bring the total project cost to €85 million.

Gleneagle claims the estimated €85 million cost of the project is more than twice the maximum amount estimated six years before and the non-repayable contribution from public funds has more than tripled to €50 million.

Gleneagle claims the possibility of increasing public funds was not made known to it or other potential bidders in 2014 and nor was it aware of the possibility that ownership of the proposed centre would transfer to the operating entity.

Gleneagle has lost out on a commercial opportunity as a result, it claimed.

Gleneagle director Patrick O’Donoghue said the commercial terms now being offered by Cork council were very different to those offered six years ago.

He was “at a loss” to understand how the council could claim the fundamental parameters of the procurement remain as advertised in 2014 given the significant increase in public funds now being offered and other changes, he said.

The case will come back before the court in May.