Landmark city office likely to be demolished after €23m sale 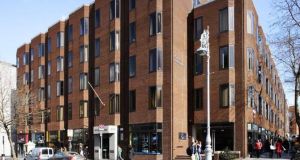 13-17 Dawson Street, Dublin – regarded as one of the best redevelopment sites in the city centre

A landmark office and retail building at the junction of Dawson Street and Molesworth Street in Dublin city centre is likely to be demolished to make way either for a large department store or a mixed-use retail and office complex following its sale yesterday to Green Reit for around €23 million.

The complex previously served as the headquarters of Royal and Sun Alliance, and was bought in 2005 by Garret Kelleher’s Shelbourne Developments for €63.5 million. The funding had been made available by the former Anglo Irish Bank.

Two other Irish companies were under-bidders for what is regarded as one of the best redevelopment sites in the city centre: Crownway, an investment company controlled by the Doyle family of hotel fame; and Ardstone, an investment vehicle used by businessmen Donal O’Neill and John Daly.

Patrick Curran of selling agents BNP Paribas Real Estate, who handled the sale, was not available for comment last night.

The block is let on 16 short-term tenancies at an overall rent roll of €943,561. This figure is expected to rise to €1.2 million when a number of vacant shops and office units are let. The main office tenant at the moment is Centaur Fund Services, which is paying a rent of €125,000 per annum. The other tenants include Xtralis Global, Alstom Ireland, Allied Risk Management and Q Aviation.

Kelleher had been expected to redevelop the Royal and Sun Alliance building when the property market crashed.

Last year he also sold the former Findlater House office building near the Gresham Hotel on O’Connell Street for €6.1 million – a long way from the €30 million paid for it in 2005.

The Dawson Street block is not the only property about to change hands on the street. The Carluccio restaurant on the opposite side of the street is among a portfolio of retail investments being marketed by CBRE and Savills on behalf of Bank of Ireland.

The highlight of the sale will be five shops on Henry Street, which are almost certain to be bought by the IPUT property fund, already owner of a number of adjoining properties.

The bank is expecting to net over €123 million for a mixture of high street and suburban retail investments and two city office blocks which are currently producing a rental income of over €7.3 million.

Another round of TV sports rights upheaval is well and truly kicking off 13:01
ComReg urges charities to contact telecoms providers 13:00
Retail sales drop by more than fifth in January 12:21
Bank of Ireland to close 103 branches on island 12:04
Bank of Ireland signals first share buyback in two decades 11:21

6 Pilita Clark: The scourge of work email is far worse than you think