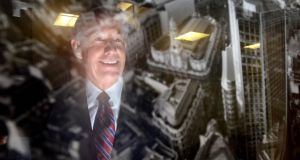 Kennedy Wilson Europe (KWE), the UK-listed property group with €1 billion of Irish assets that is at the centre of a takeover bid, said its income increased in the first quarter as it signed 36 new commercial leases across its portfolio, including the Stillorgan Shopping Centre.

The company, where Bank of Ireland is its second-biggest tenant, after the Italian government, signed a 25-year lease with Tesco last month under the retailer’s plans to take up additional space at the shopping centre that is currently being developed.

The group has also upgraded parts of the Portmarnock Hotel & Golf Links in north Co Dublin, where it has already booked 46 weddings so far this year compared with 25 for all of 2016.

KWE, which was floated in 2014 by US-based Kennedy Wilson Holdings (KW), revealed last week that it has agreed to be taken over by its former parent, which continues to own almost 24 per cent of the stock. The deal, which is subject to investor approval on both sides, would see KWE shareholders receive 0.776 new KW shares for each KWE stock they currently hold.

However, shares in KW have since fallen by about 9 per cent, amid concern that the transaction does not apply enough of a discount to the European assets to reflect uncertainties over Brexit, given that the UK makes up more than half of the portfolio. Some investors also believe the deal undervalues KW’s own shares, according to investors and analysts.

Meanwhile, hedge fund guru George Soros’s Quantum Partners, which owns 12 per cent of KWE, publicly criticised the deal this week, pressing the European company’s management to look at alternatives such as opening the process to other bidders who would pay cash or carrying out an “orderly liquidation of the company over time”.

“Since the announcement of the KW-KWE merger offer on 24th April, KWE have been keen to highlight the strengths of both the underlying KWE property portfolio and the team’s active management abilities,” said Colm Lauder, an analyst with Goodbody Stockbrokers.