Landlord of Dublin restaurant alleged to have changed locks over rent 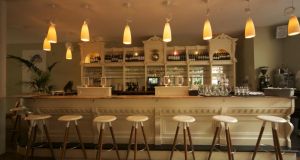 A company of which restaurateur Jay Bourke is a director has secured High Court permission to apply for an injunction after the landlord of a Dublin bistro allegedly took over the premises and changed the locks in a dispute over alleged rent arrears.

The Eden Bar and Grill, South William Street, is operated by Zozimus Entertainments Ltd, of which Mr Bourke is a director.

Mr Justice Paul Gilligan gave the company permission to serve at short notice its intention to seek an injunction against the landlord, Manoj Chawla, Larchfield Road, Clonskeagh, Dublin, seeking the removal of a security firm which took over the premises. The matter comes back before the court today.

In an affidavit, Mr Bourke says he turned up at the restaurant on yesterday morning to find a private security company had gained access. Three notices were placed in the windows stating the restaurant was now closed and a contact email address was given.

Mr Bourke says the locks were also changed. He called the gardaí who, he says, told the security firm they had no right to be in the building without a court order. Mr Bourke said the security firm had arrived at the premises at 6.15am and told a painter working there they were present at the behest of the sheriff and required access.

Mr Bourke says around the same time, a letter was delivered to his home stating the landlord “now proposes to implement the forfeiture clause in the lease”.

Mr Bourke says while his company did fall into rent arrears in June 2013, they were substantially dealt with in 2014 and as of January 15th last, they had been discharged in full.

He says the landlord does not however accept the arrears have been discharged in full.

At no point prior to yesterday was there a threat from the landlord’s solicitors to forfeit the lease, he says.

Mr Bourke’s counsel, Peter O’Brien, who made the application to the court on an ex-parte basis (one side only represented), said as a result of the landlord’s actions, suppliers were turned away and 20 employees were out of work.