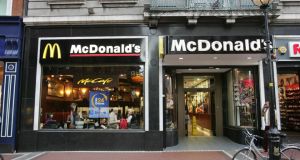 McDonald’s on Grafton Street had been paying €1.15 million until its lease ran out in 2011. The rent subsequently dropped to €600,000. Photograph: Matt Kavanagh

McDonald’s fast-food outlet on Dublin’s Grafton Street is among eight retail investments and five office blocks which have just been bought by Irish Life for about €154 million.

The properties in the Sovereign Portfolio were assembled mainly in the 1990s by Royal Liver Assurance which now trades as Royal London Asset Management. It attempted to offload the investments in 2009 and again in 2010 but withdrew them on both occassions.

This time around the sale attracted about six Irish and overseas investors convinced that the ongoing recovery in commercial property rents and values which has been evident since early in 2014 is set to continue.

The level of interest in the sale was also boosted by the fact that 75 per cent of the assets are retail properties on Dublin’s principal streets – Grafton Street, Henry Street, Dawson Street, O’Connell Street and Westmoreland Street – apart from one on Cork’s St Patrick Street.

Irish Life has settled for an initial yield of about 4.4 per cent on the mixed portfolio which is producing an overall rental in come of €7.4 million. CBRE advised Royal London while Knight Frank acted for Irish Life.

Easily the most valuable block in the sale, 7-11 Grafton Street, has four shops including McDonald’s which are bringing in an overall rent of €1.82 million. McDonald’s alone had been paying €1.15 million until its lease ran out in March 2011. The rent was subsequently adjusted down to €600,000.

The other significant rental contributor on the Grafton Street block is Office Shoes which pays €990,000 to cover their own outlet as well as the sub-letting of an adjoining shop to Health Matters and office accommodation overhead. Also included is The Body Shop which contributes €165,000 in rent and the Swan Training Institute which pays €65,000.

On the opposite side of Grafton Street, Clarks shoe shop and the Pamela Scott fashion outlet, along with overhead offices are rented for €702,984.

The Hodges Figgis period building on Dawson Street also forms part of the portfolio and contributes €505,688 in rent. Also on Dawson Street, Irish Life will be able to collect a rent of €324,050 from Tower Records and Optica as well from office tenants overhead.

The sale also includes 2-4 Merrion Row where the ground floor is rented by a convenience store at €247,750. The three upper floors of offices are vacant.